How To Speak Your Pre-Teen's Language

As your child nears his or her teens, you may find it more and more difficult to communicate. In fact, you may feel like they are speaking another language.

That's because they are.  They are speaking Hamiltonese.

This is a new language inspired by the musical Hamilton, which has now been memorized by every pre-teen in America (and to be fair, many adults).  Its popularity with this age group defies logic. Children who don't like history, politics, economics, old things, old people, long movies with little action, wigs, ruffles, buckles, dancing, music that is produced by actual instruments, singing that does not sound like a robot or dying cat, or anything that is liked by adults--those same children are watching Hamilton on loop. When they are not watching it, they are listening to the soundtrack.  When they aren't listening to the soundtrack, they are singing it (badly). When they aren't singing it they are rapping it (also badly). When they aren't rapping it, they are researching how Lin-Manuel Miranda became THE COOLEST PERSON ON THE PLANET. 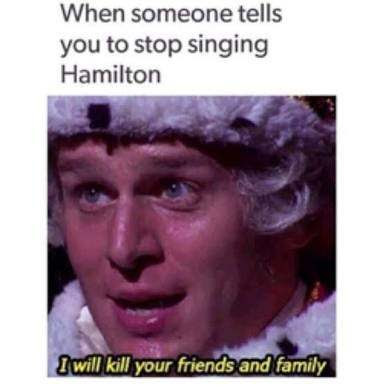 Just don't suggest they read an actual book about the actual Alexander Hamilton.

My daughter, Charlotte, has gone deep, deep, deep, deep into the world of Hamilton. So deep, I do believe she has dug through the space-time continuum that exists in the earth's core and has in fact visited the year 1776 (where she was stunned to find things being run by white people who did not rap). So deep she now talks about "Lin" as if he is her locker mate. And he might as well be, really, since she's barely seen another child since March. Lin might as well be her BFF, and March might as well be 1776. And the Founding Fathers really were all black. 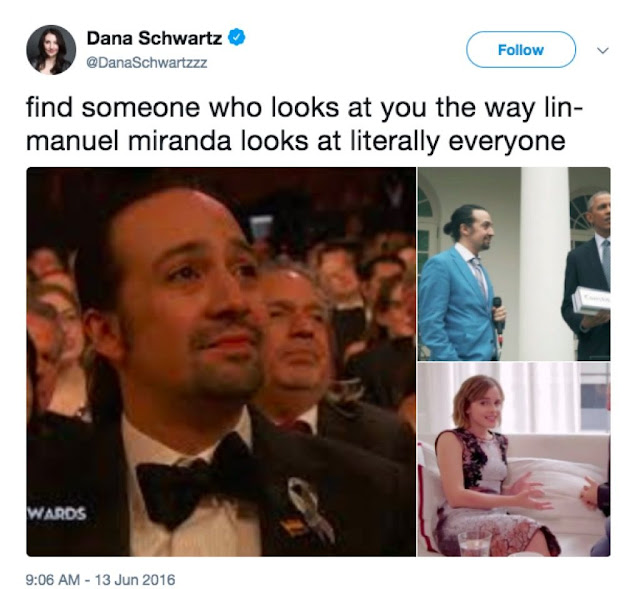 She also peppers her conversation with lines from the show, sung or rapped or simply stated, whether or not they are on their face relevant to the issue at hand. Thankfully, I have seen the show myself a few times and can usually tell what she is talking about. But in case you are among the 17 human beings in America who have not seen Hamilton either on stage or Disney Plus, I am here to help you figure out what the heck your pre-teen is saying to you.  Better yet, I will give you a few lines to throw back at them so that they might actually listen to you and do what you say.

And I'm not throwing away my shot!
You should be fairly worried because it probably means she is either plotting revolution or planning to hack the parental controls on her ipad so she can download instagram.
If she says:I gotta holler just to be heardWith every word, I drop knowledge
She is telling you she is (a lot) smarter than you, and you are really missing out by not listening to what she has to say.
If she says:
Can I be real a second?For just a millisecond?
Stop whatever you are doing and engage. While it's possible she's just going to burst into a rap about George Washington's military disadvantage during the Revolutionary War, she may actually have something important to tell you about her present-day life.

If she says:
I am inimitableI am an original
She's saying she is way more awesome than you can imagine and you really just don't appreciate her. Just don't ask her what "inimitable" means.
Then I'm willing to wait for itI'm willing to wait for it
She won't ever say this, so don't bother with it.
He exhibits no restraintHe takes and he takes and he takesAnd he keeps winning anywayHe changes the gameHe plays and he raises the stakes
Her brother is driving her crazy and possibly cheating at Super Smash Bros, and she is on the verge of challenging him to a duel. Hand her the nerf guns and stay out of it.
Watch your toneI am not a maiden in need of defending, I am grown.
This is the classic "Stop treating me like a child even though I am by all definitions a child." Also, you don't need to challenge another parent to a duel, she'll work it out herself.
I wasn't aware that was something a person could do.
She may say this in response to being told to put away her laundry, eat vegetables, do her homework or any number of things she has no intention of doing without being forcefully overthrown by colonists.
OK, now here's where it gets good, because here's where YOU learn to speak Hamiltonese, and your child might confuse you for Lin-Manuel Miranda and subsequently hang on your every word.
When you want to remind them who is in charge around here and/or hint at the possibility or mild violence:
And when pushComes to shoveI will send a fully armed battalionTo remind you of my love!
OR
And no, don't change the subjectCuz you're my favorite subjectMy sweet, submissive subjectMy loyal, royal subjectForever and ever and ever and ever and ever..

*Flying spittle is a highly effective added touch.
OR
Dying is easy, young man. Living is harder.When you are trying to get your child to do their chores or at least clean up their own damn crap:
I cannot be everywhere at once, peopleI'm in dire need of assistance...
OR
We are a powder keg about to explode
I need someone like you to lighten the load. So?When you want to be inspirational or supportive like Oprah but you know if you try to say it in English and not Hamiltonese it will be met with eye rolls and sighs:
Look around, look around at how lucky we are
To be alive right now
*This one particularly good when they ask you to buy more stuff or clean their plate; works as an updated version of, "There are starving children in Africa."
I don't pretend to knowThe challenges you're facingThe worlds you keep erasing and creating in your mind
When you need to convey important life lessons about not being insufferable:
Why do you assume you're the smartest in the room?Why do you assume you're the smartest in the room?Why do you assume you're the smartest in the room?Soon that attitude may be your doom!Or just basic science/karma:
Ev'ry action has its equal, opposite reactionsWhen you are tired of people whining and you want to be left the heck alone:
I wanna sit under my own vine and fig treeA moment alone in the shade
I look back on where I failedAnd in every place I checkedThe only common thread has been your disrespect
When she is procrastinating on her homework:
I'm looking for a mind at work
When you need to say NO, you can't do that: 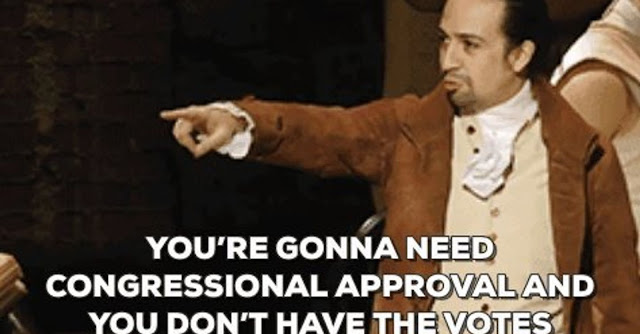 Of course, none of this is likely to work because you are not Lin-Manuel Miranda nor Alexander Hamilton.  Which really means Lin-Manuel Miranda needs to get to work and start brainwashing our kids to do other things besides rap-argue about the National Bank and the rules of dueling. Hey Lin, how about a musical called "Listen To Your Mom," "Mom Is A Genius," "Electronic Devices Will Fry Your Brain," "Hang Up Your Wet Towel," or "Read A Damn Book"?
Email Post