I don't watch HGTV anymore because every single show is hosted by those Gaines people now.  I have never watched more than five seconds of them and I know nothing about them, but I've somehow acquired an irrational, completely baseless dislike for them.  Maybe that's because they seem to have displaced House Hunters International.  Seriously, do they need the ENTIRE channel?

While I won't deign to watch their programs, I find myself unwittingly influenced by their decorating style, which I'm told by the internet is called "Modern Farmhouse" and is all the rage right now.  When you want your house to have the earthy charm and integrity of an early 20th century midwestern farmer but you also want indoor plumbing and electricity, not to mention gleaming tile and marble countertops, you turn your home into a Modern Farmhouse.  It's minimalist but full of adorable details like painted signs that direct your guests to the (indoor) toilet and an antique sewing machine that would give you tetanus if you actually tried to use it.  It's spare yet cozy, simple but agonizingly planned, basic yet 3000 square feet of living space including a man cave (the big screen TV is hidden in a vintage chicken coup.  Don't worry, it's been cleaned).  Everything is wrought iron, reclaimed, industrial-rustic-agricultural, oil-rubbed, down-home.  Neutral colors.  If you are confused, just go dismantle someone's barn, reconstruct it in your living room, and paint everything else the perfect shade of "greige" (which is, by the way, Revere Pewter). Plant some wheat in the kitchen, harvest on Tuesdays.

I'm not mocking, I tried to do all of this.  Well, in the master bathroom anyway.  We needed to remodel it badly--there was unrepentant mold growing up the walls of the shower, which had never drained properly--and we already had a claw foot tub.  Other elements of our house were sort of farm-house-y anyway, through no fault of our own.  We have exposed wood beams, though I cannot verify whether they were reclaimed from any former life, and wrought iron here and there.  The previous owners put their own spin on things,  however, involving weird bright tile that matched nothing and random, anachronistic elements inexplicably left behind when the house was completely remodeled in 2003, such as an ugly clouded glass shower door from circa 1988 and a wall with a window cut-out between the kitchen and dining room and a massive Italian-renaissance-looking chandelier in the family room that screams Vegas hotel.  Our bathroom had ugly green tile everywhere, including atop a ledge by the tub and a bizarre structure housing the tub faucet sitting in the middle of the room.  The vanity was fine, a reclaimed kitchen table, very farm-y, but it had no storage.  I had to fashion a curtain to hide all the crap we threw under there. 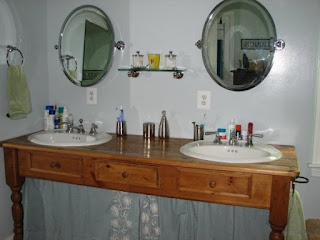 When we decided to remodel, I mainly consulted the internet and my interior-design-obsessed, gay-best-friend-who-is-not-actually-gay, Gary.  Gary has impeccable taste, like all gay best friends, real or faux, and more importantly, he has no children, so he has quite a bit of free time and brain space to ponder the differences between porcelain and carrara tile and the exquisite beauty of Benjamin Moore's latest shade of grey paint ("Grey Matter." I kid. They have not yet named paint after human tissue).  I asked him for his thoughts.  As it turns out, he had apparently already planned out a complete remodel of my entire house in his head.  He launched right in.

"Well, of course, we'll do white subway tile in the shower. Oil-rubbed bronze for all the hardware, obviously.  I'd get some really cool accent tile in grey/white/black pattern.  White for the vanity, or maybe some rustic reclaimed wood!!  Grey walls!!!  A wrought iron chandelier!!! Oh, Holly, it's going to be amazing!!!"  He was so enraptured, for a moment I forgot about the outcome of the 2016 election.  And then in the next moment, when I remembered, I didn't care.  Who cares if I was the subject of a megalomaniacal tyrant with the decision-making skills of a wildebeest? I was going to have a new bathroom!!!

I researched these ideas further in that great library that is Pinterest, where I learned that what he was envisioning is in fact the Modern Farmhouse style, as popularized by those Gaines people.  I looked at tons and tons of pictures and became ever more charmed.  I could see myself lounging in my claw-foot tub, the one I've had, but never used because sitting in it forced me to ponder the ugly green tile.  Now when I sat in it, my dream of being a modern farmer who doesn't actually want to live on a farm and is increasingly troubled by the modern world but still wants nice things would be uninterrupted and perfectly framed by white subway tile.

So, mistake number two, the first being betting Gary actual money that the Mueller report would result in Trump's impeachment.  I didn't listen to Gary about that, nor did I take him to the tile shop with me to buy tile.  In my defense, he quite rudely moved away before I could get that done.  Also, I was slightly afraid of going to the shop with him for fear he would end up stripping naked and attempting to shower in the showroom after falling in love with some hand-painted Moroccan-patterned cement tile.  So I went by myself.

I looked around the showroom and found the plain, white, cheap subway tile.  Great, I thought, this will do.  Now I just have to find something for the floor and inset.  I found a salesperson and told her what I wanted.

"The subway tile, huh."
"Yep, that is what I said."
"So, it's trendy, I know, but...the quality is not the best.  In my opinion, it just looks kind of...cheap."
I flinched. "Oh. I see. Well, it looks fine to me... (RUN HOLLY RUN)...but is there something similar?"  YOU. IDIOT.  NEVER ask the sales person to show you something similar to something cheap.  You deserve to die an old woman in Trump's America, after he lives to be 120 and cancels all elections.
"Oh yes, come look at this gorgeous glass tile. It's just exquisite."

We walked over to a wall lined with, yes, truly breathtaking glass tile in various shades.  And there was white.  I swear to you, it was white. It looked white, I did not imagine it like I did the virtue and good sense of the American people.  Like truly white.  And it was beautiful, like the Modern Farmhouse went to the spa for the day and got all the wheat grime removed from under its fingernails.  It still looked modern and pastoral but now it was also ethereal.  But of course still earthy and authentic.  It was like Jesus was a tile.  Being the child of missionaries, there was no way I could reject it.