In Which I Admit That KEVIN WAS RIGHT ABOUT EVERYTHING

If you've read this blog for very long, you know that I playfully tease my dear husband, Kevin, for his germ-"respect" (it is NOT a phobia) and his ultra preparedness for disaster.  Since we have been together/2002, he has followed every single government directive for preparing for emergencies, disasters, terrorist attacks, pandemics, shortages, what-have-you.  He has bought plastic sheeting. He has bought duct tape. He has not installed a porta-potty in the back yard, but I'd bet good money that he has googled it.  He has bought water and food and masks and goggles and gloves and bleach and soap and sanitizer.  One year for Christmas, I gave him a non-perishable, 3-month emergency food supply for 4 people.  He lit up like a 9-year-old receiving an Xbox.

We still have that (it really is non-perishable. It is probably also inedible) and now we have boxes and boxes of other crap, too, which he began assembling at the first report of the virus in China. We even have N95 masks (just one box), which we are now donating to our local hospital.  While he rushed around stockpiling goods, I rolled my eyes. While he yelled at me for touching my face, I touched his face. While he stood over me and the kids counting to 20 while I washed my hands, I threatened to drink out of his designated cup. When he told me we would soon be imprisoned in our home, I looked at him like

And when he told me, NO, the kids cannot have playdates while school is out, I looked at him like

And now I am here to say HE WAS RIGHT ABOUT EVERYTHING. All of it. I am now following his advice to the letter. If he makes a decision, that is what we are doing. What he says goes.

In other words, I am finally the perfect Southern Baptist wife I was taught to be even though I am now a female-ordaining, path-to-hell-paving Methodist. 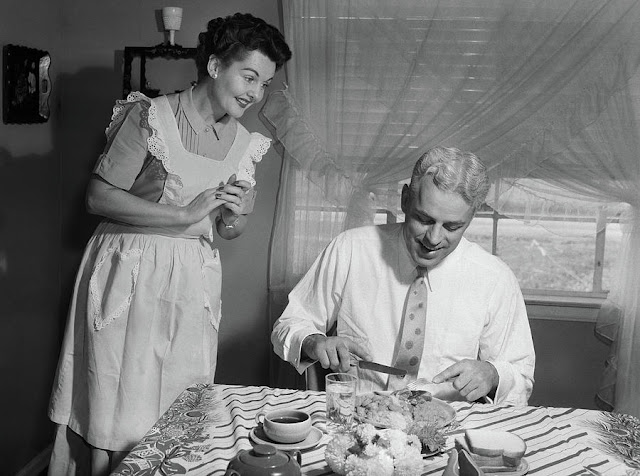 Going on the record like this, in writing, for all to see, for him to refer to for all time--it's very risky for me. It will almost certainly come back to bite me when I rediscover my feminist ire. But I feel he deserves it.  He has doggedly looked out not only for our family, but for the entire community, and he is indeed a very good person.

Congrats, Kevin, you finally wore me down! It only took 18 years and I'm not sure how long it will last, but cherish this blog post always.