My Modern Farmhouse is Neither Modern Nor a Farmhouse. Discuss. (PART 3)

Sorry there has been such a lag in between Parts 2 and 3 (and I love that I just apologized for that, as if anyone gives a crap).  It's just that I have been on a DIY binge the likes of which this house has never seen. As yes, that's like saying Lawson is bingeing on veggies when he eats like a twig of broccoli.  Still, it's really bizarre, I'm not sure who I have become.  And in fact, I must warn those of you who read this blog for all the hot-messiness, spectacular failure, utter disaster, and anti-classic-mom snark--this post is going to be a tad bit like the successful mom blogs, just for once.  I am going post pictures of things I have crafted and say things like, "It was so easy!" and "Isn't this adorable?" and "I just loved how this turned out!"  Whether you love or hate this strange, exotic version of Holly, don't get used to her, as she will soon collapse in a heap of exhaustion and die.

I think you all know that I am not exactly a confident crafter.  My particular expertise is vision, not implementation.  I look at Pinterest and see cool stuff and get inspired and have dreams.  Or else I hire someone.  If I do implement, it never turns out like the vision.  Mainly because I find doing things the "right way" tedious and slow.  Example. I once bought a kitchen island that required assembly.  It came with these screw-anchor thingies. I found them redundant.  I threw them to the side and put the whole thing just the screws and also some wood glue.  Well, it held together, but it rocked back and forth like a porch swing.  On the other hand, with some additional ingenuity, you could chop vegetables on it without moving your arms.  I refuse to paint before priming, measure twice before cutting, plant adding organic material, or put the exact amount of anything in my cooking.  I eyeball everything and fix it later.  All my "gallery walls" are littered with erroneously-placed nail holes.  And, as we have already established, I buy a butt load of glass white tile without verifying before it is installed that it will actually look white in my bathroom. But think of all the time and effort I save being imperfect.  And well over half the time, it turns out fine anyway. I like my odds.

But back to the bathroom--I was desperate to salvage things and turned to the wisdom that is my Facebook friends.  All of them had a different solution, of course, but I chose to listen to the one that is actually an interior designer, Aly.  Aly gave me some great ideas that I of course mostly ignored, but, they did inspire and lead me to what I eventually did, and I count that as listening to an expert.

First of all, Aly identified the fun black and white cement tile I did on the tub ledge as the biggest problem (I think she said it was "confusing," which is a nice way of saying, "Why the Trump did you put that there?").  I loved that tile like a baby I didn't have to birth or breastfeed myself.  But I was forced to admit that it was indeed "confusing" with the sea foam shower.  After briefly considering sledgehammering it,  I instead took some of the buckets of paint leftover from the three times I had had the contractors paint the room hoping one of them would turn the shower tile white and HAND PAINTED over the black with grey to soften things up. Yes, that is insane.  It ONLY took me 3 hours! It was so easy!  My hand-painted-vintage-curated-crafted-handmade tile turned out so pretty! 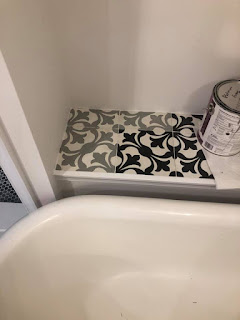 Then I went scavenging in the house for other decor items I already had that I could use to embrace the actual-vs-imagined color of the shower.  I grabbed a bunch of art from different rooms and framed some vintage South Africa travel poster prints I had told my sister, who lives in South Africa, I was giving to her that I was now going to keep for myself, because desperate times and all.  She would understand.  I also took Charlotte's rug, because it had grey and blue and I thought it would look good. She wasn't happy, but again, everyone in the family has to make sacrifices in the midst of a decorating crisis. 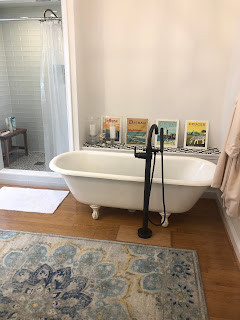 Then we got down to real business--repainting the walls yet again, only this time DIY because the contractors had moved on to the home of a sane person who only asks them to paint a room once.  Inspired by Aly's advice, I decided to once again embrace the sea foam and go with some shade of blue/green/teal.  I agonized over paint chips. I decided to actually do things "the right way" and paint samples before making a final pick.  I went with BM Gossamer Blue and spent the day painting.  As with every time I have ever painted a room, I threw my back out.  I downed some ibuprofen with a bottle of wine and kept on trucking. 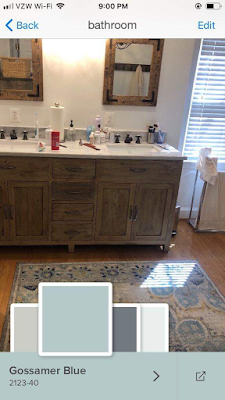 The paint job looked amazing, as did the art, the rug, and the hand-painted-vintage-curated-crafted-handmade tile.  At this point, I became drunk with crafting power.  I painted a dresser, because again, I had quite a bit of leftover paint and the dresser was ugly.  I painted the vanity hardware because it wasn't quite right.  I dyed towels. Yes, that's right. Why buy new towels when you can just dye them? And seriously, that really WAS easy.  Throw them in the washer with some Rit.  I'm going to start dyeing everything now. Every night I'm going to dye my entire outfit for the next day and start a mono-chromatic trend.  OK maybe not. But I did dye my bathrobe BECAUSE WHY IN THE WORLD NOT.  I will never have thin ankles, but as God is my witness, I will have a teal bathrobe that matches my new towels.

And now, buckle up, because here's where I become ADORABLE, like one of those Hello Kitty moms I make fun of all the time.  I still needed more art, and I had a music lyric theme going on one wall.  I also had one of those painted wooden boards that said "antiques" which is just kind of dumb/generic, and I don't know why I ever bought that.  So I thought, what if I painted over the word "antiques" and wrote something more meaningful?  I can do that. I can obviously paint, and I know how to spell stuff and write words.  And that is what I did! I wrote, "At Last," which was the song we danced to at our wedding.  At this point, please feel free to take a vomit break before we continue. 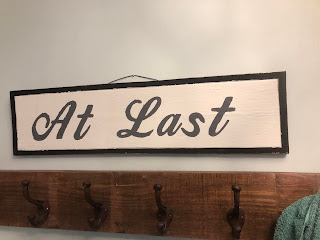 And that completed the bathroom!  But not my DIY streak!  I just kept going, like some kind of Martha Stewart roomba, roaming the house, bumping into stuff and crafting it.  Among other things, I made these cornices, which had been on my delusional to do list for over a year.  I would like to say, "It was easy!" but it wasn't.  It took me an entire day, even though I used a kit and the girl in the instructional video did the whole thing in 15 minutes.  And it looked like real time, too. She sawed through an entire large board in five seconds.  She is a liar and a con, or else she has superhuman, compact-sized biceps. I also painted Lawson's bathroom because I still had paint, and my back was already out so I figured what the heck, I'll just drink more wine.

The next item on my agenda is painting the rest of the house on a multi-year timeline, a task that will either leave me a quadriplegic or an alcoholic or an alcoholic quadriplegic.  Before that, I plan to Airstone some columns (google it).  I am only attempting that because my BFF and DIY Queen Christina is coming to visit, and if you don't give her a project, she starts lovingly picking imaginary nits out of your hair just to keep her hands busy.  Just kidding, but she does like doing stuff, and I do like exploiting her.  And this project will involve power tools!  It's like the next level.  After this, I'll probably think I can build my own kitchen cabinets, at which point Kevin will hold an intervention.

But I just loved how it turned out! 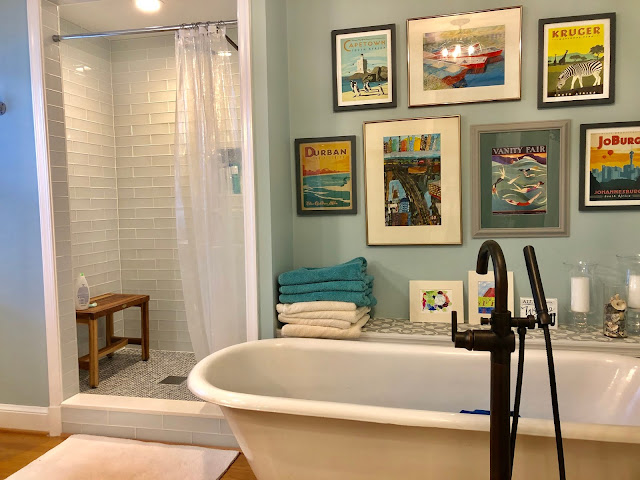