What Am I Supposed to Do With This? 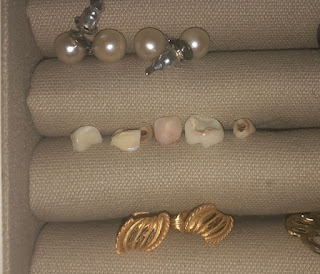 I remember when I discovered my mother was hoarding human teeth in her jewelry box.  I went in there to rifle through her valuables to see what I could pawn for drugs.  Just kidding, I liked to try stuff on.  That was before I had two kids and a job and no time in in the morning to accessorize.  Anyway, I opened one of the little drawers looking for rings, and there they were, a whole pile of teeth.  Whose teeth were they? Was my mother pulling out all her teeth? Were they just spontaneously falling out? Is that what happened when you got old?  Or--Was she a serial killer and those were her trophies?  Was she digging up dead people and stealing their teeth? Or, even worse--were those MY teeth and WAS THERE NO TOOTH FAIRY?! Dear God, please let my mother be a serial killer.

You know what is even more disturbing? She still has those teeth in her jewelry box.  She's not a typical hoarder either, and she's not terribly sentimental.  She has very little of my childhood memorabilia in fact.  Other than some home movies, a wrought iron candle holder I made in 8th grade welding class that is actually not half bad, and our Star Wars Land Cruiser and a few action figures, which I still play with when I go to her house (obviously), she has things pretty well cleared out.  But she's inexplicably got those teeth.

I don't even think my mother-in-law, who has carefully archived every shred of my husband's childhood in her attic for display in his eventual presidential library, has his teeth. Perhaps I am wrong about that, but I think she draws the line at body parts. I have read essays he wrote in 5th grade and seen some marker squiggles on paper from when he was in preschool.  There are old baseball uniforms, letter jackets, programs from a 1983 Christmas pageant (several copies), Boy Scout patches, homemade mother's day gifts, pressed wildflowers he picked, old halloween costumes, every report card, every science project, every artistic rendering, every note from multiple teachers telling her he is a genius and they have never had a student like that and he will in fact be president.  There are boxes and boxes of this stuff.  If Kevin does become president, the tourists will have to schedule several weeks to go through all of the childhood exhibits.  But, as far as I know, they will not see his teeth.  Presumably she threw them away, or buried them in the yard, maybe after performing a sacred tooth ritual that only the best mothers know to do.

If he doesn't become president, I am going to have a crap-load of stuff to clean out of that attic someday.  And if he insists that we keep it until we die, my children--and let's face it, Charlotte--will have to decide what to do with it.

And also my teeth and a wrought iron candelabra.

And now also her teeth.  Because all of those are now in my jewelry box.  Because that is what you do with teeth, I guess.  If you don't know about the sacred tooth ritual, that is.  Because, let's face it, I was never going to make that cut.

Seriously though, there is so. much. stuff. Stuff that cannot be easily identified as trash.  Unlike the top of a yogurt container, which is clearly trash.  Unless you are my husband or child, then it is something that you might need later, maybe to massage your cuticles with or use as a makeshift mirror.  But to a person who does not enjoy watching me swallow a stroke, it is trash.  But then there is all the sentimental trash that has some expectation of being archived.  You have to keep it, otherwise how can you claim to adore you children?  So you keep piling up the artwork and homework and tests and programs and, apparently, teeth.  And then, your parents pass away, and you inherit all of the remnants of your childhood they have been saving, and maybe even some remnants of their childhoods.  Maybe even their parents' childhoods. No, probably not, no one cared enough about children back then or had art supplies.  But the archived childhoods start piling up.  And after many years of this, you can't get out of your house anymore to buy groceries because the front door is blocked and you starve to death. And then your daughter or dauther-in-law has to clean everything up.

As a historian, I have to say I am glad at least a few people do keep stuff because otherwise I would have had a really hard time writing a dissertation.  And museums can display the stuff to show you how people lived a long time ago and charge admission even.  I guess the hoarders own history while the neat freaks pass from this earth without a trace.  Still, while I did read her letters for my research, I didn't need Elizabeth Cady Stanton's teeth.  She probably didn't have any left by the time she died anyway.  And what did she do with them as they were falling out?  I'm guessing she threw them away, along with her kids' teeth.  At Mt. Vernon, they have George Washington's false teeth.  But he wore them while he was president, so obviously they were worth keeping.  I did not see any of his baby teeth at Mt. Vernon.

I have a filtration system.  When anything comes in the house, I try to throw most of it immediately in the trash without anyone noticing.  About 25% of it I place in a basket.  When that basket is full, I go through it and throw out about 75% of that.  The cream of the crop stuff goes into the Permanent Archive in the storage room, presumably until my children go to college.  Then I guess I will spend several days going through it all and weeping over it.  Then I will put it back in a box to save for some unknown purpose.  Maybe I should have it all recycled into an eco-friendly coffin when I die and be buried wrapped in my children's artwork.

Maybe they can then throw in all the teeth.  Mine, theirs, their kids,' everyone's.  Done.  Bury my heart with a bunch of people's teeth.  I didn't have a filtration system for teeth.  It's hard to archive teeth.