Halloween is NOT the new Christmas, OK? 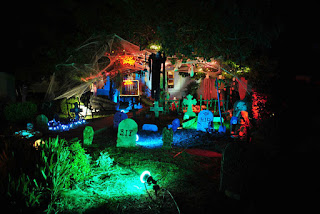 Charlotte and I were driving around our neighborhood last night, and I was dismayed to see how many houses had serious Halloween decoration/light situations going on.  This one house looked like a freaking amusement park. It had like 12 of those massive inflatable things--a dragon, a witch, a pumpkin, a ghoul, a spider, a Trump, plus like six more things.  Plus they had the lights, they had the things in trees, they had the scarecrows and the harvest items.  It was like someone had told their Alexa to order All The Things and Amazon arrived with a moving van and just exploded all over their yard.   Had I had my wits about me, I would have noticed the house in the distance and made a sharp U-Turn before Charlotte could see it.  But not only did I not do that, I SLOWED DOWN because the witch had hypnotized me and I could not look away.  We came to a full stop in fact and both just stared at this house with mouths agape.
"Woah," I said.
"Woah," she said.
Then, I waited for what I knew was coming, because I have been hearing this at least 50 times a year for at least 7 years.  5, 4, 3, 2, 1...
"Why can't we decorate our house for Halloween??"
I went though my reasons yet again.  "Well, all that crap is expensive, for one thing."
"Yeah but it's a one-time cost," she said, like some kind of economist's child.
"Well but you have to find a place to store all that crap," I said.
"We have a garage," she said.
"Well you don't understand.  It will give me a panic attack. I would have to buy more plastic bins.  I would have to reorganize the whole house.  I would have to stop showering to find the time," I said.
"You're mean," she said.  Always the trump card.
"Well, but also it's a lot of work to put all that stuff up," I said.
"Yeah but you decorate for Christmas," she said.  "What is the difference?"
"I'll tell you what the difference is.  Jesus, that's what.  Like the Actual Holy God.  I think I can manage some icicles for that," I said, "But Halloween is just for fun. Or else for Satan.  Either way, things have really gotten out of control."
"Mo-om. Geez, calm down," she eye-rolled.

Now, I have nothing against Halloween.  I think it's really fun.  For one thing, I like an excuse to look ridiculous on purpose.  I'll often wear an regular outfit that I like but know deep down is ugly or unflattering and go as a farmer or hobo or hippie or someone allergic to anything touching their skin or someone who has lost 200 lbs but hasn't yet bought any new clothes.  Because given my druthers, I would just wear a pair of massive overalls or a mumu  or like clerical robes every day.  I also love trick or treating, because it is the one time of year that Americans act like they actually want to live in a community where people smile and make eye contact.  You can knock on your neighbors' doors without worrying they are going to set off a booby trap or mistake you for Mormons.  Then of course there is the candy, which you eat in order to spare your kids the tooth decay and the diabetes.  You must eat it unless you hate your children.  Your pancreas can handle a lot more sugar than theirs can.

But seriously, people, Halloween is NOT Christmas.  It is NOT.  It should not require that much work.  Please, don't make it require that much work.  Don't make my children think our house has to look scary.  Heck, maybe i should just open the blinds and turn the lights on, that should be frightening enough.  I just want to maybe carve a pumpkin, order a couple costumes from the internet, buy a bag of fun size candy bars, take my kids around the neighborhood wearing pajamas that I tell people are a baby costume, then sit in bed and binge on chocolate.  I do not want to spend weeks before hand stringing lights and tying large spiders on my roof.  I do not want to cover my bushes with cotton gauze and bury skeletons in my yard.  I do not want a bin in my house or my garage labeled "Halloween Decorations."  Because where will it end? Huh?  Next thing you know I will have to put up giant inflatable eggs in my yard for Easter and repaint my house in pastels and create a red, white, and blue light show that looks like fireworks for 4th of July and have little cupids hanging from my trees and shooting little candy arrows at passersby for Valentines and construct an enclosure for a turkey family for Thanksgiving.  And there will be so many bins.

Here's my chief complaint about America (well, these days I have more, but I'm talking more generally here).  Americans just don't know when to stop.  While most Europeans have been living in modest three bedroom houses with one living room for the last 50 years and decorating with candles and fresh greens for Christmas, Americans now think a Man Cave is as essential as a toilet room and incur serious injuries untangling 57 strands of lights every holiday season.  Seriously, judging from HGTV, the average American thinks a normal home must have a formal living room, a family room, a play room, a media room, a man cave, and a crafting room on top of all the other essential ones.  That is a lot of house to keep clean and organized.

Here's my thing with consumerism.  I'm no earth-mother-hippie. I like to buy crap same as the next person.  But that crap had better make my life easier not harder or I'm not having it.  And I do not see what a giant inflatable mummy is going to do for me.

I told Charlotte she could make her own decorations.
"But that's a lot of work," she said.
"Not for me," I said.
Email Post