SPOILER ALERT: I need to work on my parenting

As Kevin and I continue to enjoy our parenting hiatus, we saw TWO WHOLE MOVIES.  IN AN ACTUAL MOVIE THEATER.  It's been so long, I was not sure there were still movie theaters that show real movies on large screens, or whether they've converted all of them to sleep disorder clinics or mega churches or places where millennials go to communally watch movies on Netflix.

However, we couldn't quite bring ourselves to completely and frivolously relax, so we saw two documentaries.  Because everyone knows documentaries are always educational and never a waste of time.  Like watching 12 hours of What Not To Wear is clearly a waste of time, but if they made a documentary about What Not to Wear, watching that would clearly be edifying.  True story.

The two films were very different, but since I am biologically incapable of truly relaxing and not thinking or feeling guilt, I have extensively analyzed them and managed to connect them into an overarching message that once again boils down to I suck as a parent.

Which is actually not how Mr. Rogers, the subject of first film we saw, would want me to feel after watching his movie.

***SPOILER ALERT***  Do not proceed if you do not want to know all the secrets revealed in Would You Be My Neighbor.

OK, so, in a really surprising twist, it turns out Mr. Rogers was an absolutely wonderful human being.  I know, right?  The film discussed how his show began when he realized that TV could be a powerful medium for communicating empathy and emotional support to children, teaching them to process complex and frightening emotions, and at bottom, telling them they had inherent worth as human beings.  It was part child development theory, part Christian theology for Mr. Rogers,  who was an ordained minister.  And it is a message people of all ages need to hear, judging by the sobs of full grown men and women all around me in the theater.  Not that I'm judging.  I was doing OK until they played a clip from one of his commencement addresses, in which he tells the graduates, "You don't ever have to do anything sensational for people to love you."  Cue the over-achiever weeping into her Diet Coke.  Because of course she doesn't deserve a real Coke.

It wasn't just the words that he said, either, it was the way he communicated them to children.  He got right down on their level, looked into their eyes, gave them his full attention, listened to them, and took them seriously.  So that when he sang

kids knew he meant it. And also I cried again.  I mean, he sang it with an adorable disabled boy right before the child was to have life-threatening surgery, come on!  And changed "the way you do your hair" to "your fancy chair."  STOP. IT.  He's either the most golden-hearted man who ever lived or more manipulative than, well, most of the 5-year-olds who watched his show and had not yet discovered their inherent worth. 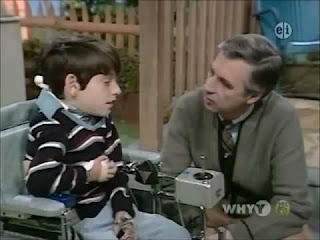 The film also discussed how some people find his message was "controversial" because they believe it gave kids permission to lay around feeling entitled and doing nothing with their lives.  I think that is BS.  Every person I know who has struggled in life and amounted to little has done so because they never felt they were inherently loved and valued apart from their actions or performance.  The sense that you are worth something in the core of your being in a way that no failure can ever touch is the very fuel of life, what helps us overcome our fears and attempt great things.  And kids' sense of entitlement comes from having too many legos, not from having too much love.  You just can't love a child too much or too unconditionally.   But you can't just tell your child you love them no matter what, you've got to get them to believe it.  More on that later.

The second movie we watched was Three Identical Strangers.

***ACTUAL SPOILER ALERT. LIKE THIS MAY ACTUALLY SPOIL YOUR CINEMATIC EXPERIENCE NOT JUST TELL YOU SOMETHING OBVIOUS LIKE LAST TIME, LIKE HITLER WAS BAD OR ICE CREAM MAKES YOU FAT.  PROCEED WITH CAUTION***

OK.  This movie was about three identical triplets who were separated at birth, along with numerous other sets of identical siblings, as part of a nature vs. nurture psychological experiment back before the profession had any ethics. They discovered each other when they were 19, and over time, why they were separated.  The study was never published, and its findings are currently sealed, although the subjects of it are working on that.

The bottom line of the triplets' lives as it related to nature vs. nurture was that while nature was truly powerful--they had many of the same mannerisms, habits, traits, preferences, talents, and struggles--nurture proved more determinative in their lives.  Two of the brothers had extremely nurturing adoptive parents.  One of them in particular had a father all three boys came to adore.  They talked about how fun he was, how accepting and loving, how much time he spent with his kids, how he wasn't demanding or judgmental.  He might even be described as lax or permissive.  One of the brothers had a less positive upbringing--not terrible, he had basically good parents, too--but his adoptive father in particular tended toward the authoritarian.  He was strict and not as warm and more demanding.  All the boys struggled with mental health issues, and in fact, there is some evidence to suggest the researchers deliberately chose birth mothers with family histories or personal experiences with mental illness.  But while two of the boys were able to manage their issues, the triplet with the authoritarian parents descended into deep depression and eventually killed himself.

Yeah, I know. I preferred the Mr. Rogers movie.

So what's the take away for me as a parent? Well, first the good news. No one could ever accuse me of being authoritarian.  Because that is a crap load of work. I am on my 16th moribund screen time regulatory framework, and I don't even make my kids brush their teeth twice a day (I'm waiting til they get a cavity, then I'm lowering the boom).  So if being too lax is better than being too strict, I am golden like Mr. Rogers.

Here's the bad news, though. Communicating unconditional love is not the same as just being chill.  Not even close.  It's time and attention. It's listening without lecturing.  It's empathy and identification.  It's showing respect even when the other person is 7 and kind of ridiculous.  It's seeing the unique beauty of your child and reflecting it back to them.  It is helping them discover their strengths and finding the courage to examine their weaknesses.  All of that takes a lot of time, intention, generosity, and emotional energy.  It requires me to get off the couch, to set down my book/computer/smart phone, to cut into my free time, and to hear all about dragons and robots and robot-dragons and worse, Pokemon.  Which, frankly, creep me out.  It requires me to set aside my own agenda--my own deep-seated need to feel worth--to accomplish things, check off lists, reach goals--and face my own fears.  The fear that I could pour everything I have into these small people, but it won't produce the more obvious credit of a successful career or a published book or a funny blog post or even a delicious meal or a clean house.  Or any credit at all, because, as important as parenting is, a lot of things are still out of my hands.  I might fail regardless, at all of it, and no one will think I'm sensational.  There's an insidious lie in all failure, that it's better to have not tried at all than to risk caring.

Mr. Rogers would want me to try harder and to care more.  But he would love me no matter what.
Email Post