Why Couldn't We Ride

Y'all know I'm a RUNNER.  Running is great exercise, it's peaceful, it's easy to do anywhere.  Most importantly, you probably aren't going to die or get seriously injured running.  Well, at least not dramatically or suddenly.  It's not like your leg is going to fall off and leave you stranded somewhere.

Unlike biking.  I like the idea of biking.  I rode around on a bike as a kid some, although in Kenya there wasn't much opportunity to do so.  Between the potholes, insane drivers, and complete absence of even one sidewalk in the entire country, my parents weren't too keen on it.  As an adult, I see folks out on the trails riding along, looking so carefree--at least the ones who don't think they are training for the Tour de France--and it definitely is appealing.

However, almost every time I have tried to bike as an adult, it hasn't gone too well.  Mainly due to my fear of death and dismemberment.  On the trails, there are the other cyclists, including the aforementioned pre-scandal-Lance-Armstrong-wannabes. These people are not out for a joyride.  More like they are trying to ferry an organ to the hospital on time for their own transplant surgery.  Their butts are coated in padded spandex, their feet are locked into the pedals--clearly communicating a level of biking skill that obviates the need for their feet to ever again touch the earth--they've got the gloves and the shirts with advertisers on it, as if any of us are so gullible to think Fed Ex is paying some middle-aged suburban dad to ride his bike around town, at least not without some packages strapped to it.  Nonetheless, they are for real, people, and you better get out of their way, you with your banana seat and and your free range feet and your basket and your jeans.  No one who is serious rides in jeans.

If you don't want to contend with these Road Warriors, you can take your chances with the cars and the hills.  I have actually seen a car hit a cyclist who appeared to be obeying traffic rules, so that doesn't instill confidence.  But the hills around here are almost worse than being plowed over by a car.  I am not sure what I prefer, the thigh-torching uphill climb, in which you are expending maximum energy only to be passed by some senior citizens on their second pair of hips out for a leisurely stroll, or the brake-torching downhill-close-encounter-with-the-Lord, in which one small pebble in your path would probably send you into the earth's orbit, never to be seen again.

Despite my biking phobia, I decided a couple of years ago, while dealing with a chronic running injury, that I would indeed become a biker.  Seeing as my knowledge of bikes and biking is on par with most Americans' expertise in African geography, I decided to go to a bike store and buy what they told me to buy.  Now, I thought I clearly explained to them that I did not intend on quitting my job and getting a corporate sponsorship and that instead I wanted to ride at a speed that would not result in paraplegia should I hit a crack in the pavement wrong.  They must have misunderstood me because they sent me home with this machine that first of all, was a sky scraper.  I needed a ladder to mount it, and my feet were so far off the ground, any attempt to put them there resulted in gynecological injury.  Speaking of which, the seat, sitting on which was akin to getting an episiotomy or wearing a metal tampon.  Meanwhile, all the weight that wasn't balancing precariously on my pubic bone was resting on my wrists, another less-than-hardy body part.  After attempting to ride around a bit, I took the bike back, insisting something was wrong, as no one would voluntarily sit astride such a torture device.  They assured me the bike fit me "perfectly," and that I would "get used to it."  Yeah right, people said that about Donald Trump being president, too, and I'm still waiting to grow the soul-callouses that most of evangelical America already has.

The other issue was all the gears, which I could not figure out for the life of me despite watching numerous youtube videos.  Figuring out what gear combo you need and then shifting to that seems to require doing calculus in your head while putting together IKEA furniture while hurtling through space at 40 mph while getting a bikini wax.  Then there was bike maintenance and tires and crap and..well, I just gave up.  Biking combines all the things I don't like--fussiness, logistics, pelvic exams, detailed thinking, practical application, and possible death. Not worth it.

Given my lack of enthusiasm for biking, and my husband's lack of enthusiasm for, well, wakeful existence, our children have been slow to the biking game.  We have tried to get them to learn at various points to no avail.  We tried the training wheels, balance bikes, nada.  Charlotte preferred her razor scooter, which did at least teach her the balance aspect.  But she claimed she had no need to ride a bike, ever.  I couldn't disagree with her.  It's not like swimming, where you can die if you don't know how (actually, it is more likely you will die because you do know how because that raises the odds you will go out and bike).  Still we got her a bike, which lived a nice sedentary lifestyle with my bike in the garage.  They both sat out there and got soft.

Then one day Charlotte decided her time had come.  Without even announcing herself, she got out the bike, did a few trial runs in our driveway and then pretty much took off.  She made it look easy and fun.  True, her bike was like 2 feet off the ground and therefore not terrifying.  She wanted me to come with her.  So I aired up my tires on my Tour de France bike, girded my pelvis for assault, and took off after her.  And you know what? It wasn't bad.  Riding with her somehow made it less scary and painful.

However, my lady bits and wrists were sore for days.  So I decided it was time for some internet research, which is what I should have done in the first place, instead of going to that bike store.  I googled "comfortable bike."  I found this: 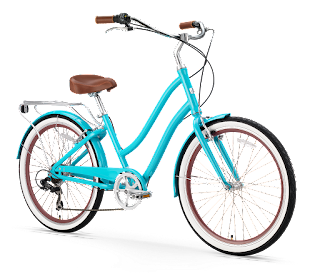 Not only is it adorable, it has 7 gears, a seat that does not feel like a suppository, ergonomic handles that don't bear half your weight, AND it is specially designed so that you can extend your legs while pedaling but still put your feet on the ground, where they belong.  While you won't see Lance Armstrong on this bike, I think it will do just fine for me.  I'm still awaiting its arrival, but I am filled with hope and am already indulging poorly advised day dreams of Family Biking Fun once Lawson learns to ride, which he will this summer.  I am dumping him on the National Parks Service, which not only is in charge of my favorite thing about America now that its democracy is a little saggy and gives its employees adorable hats, they ALSO offer free bike riding classes.  I know. It's as if you just found out that wine aids weight loss.  Mind. Blown.

I'm sure the Family Biking Fun will in reality be flattened by a mack truck full of whining, but at least  I'll be able to walk away from the crash.