The Hills Are Alive, and They Are Taunting Me

Kevin and I have very different theories on family vacations.

Kevin's is no doubt carefully constructed, thoroughly researched, and bolstered by a number of scientific studies regarding childhood development, parenting, human nature, and economics.  And of course a heavy dose of his ridiculously happy childhood.  But those of you who know Kevin know that he has full academic citations for everything he utters out loud.  If he doesn't, he doesn't say it out loud.  He may even source his thoughts for all I know.  Just in case you are wondering, this penchant makes arguing with Kevin an extremely frustrating and ultimately futile exercise.  But I've probably already said too much about Kevin, per our non-binding prenuptial agreement.

Kevin's Theory of Family Vacations is elaborate, but in practical terms boils down to a progressive stage of vacation types correlating to the children's ages that goes like this:

Stage One--Beach Vacations.  You do this when the children are babies through preschool because it minimizes logistics and walking.  Also presumably small children like sand and water.  Ours didn't, of course, but most children do.  You get a beach house and just kind of hang around for a week.

Stage Two--Theme Parks.  You do this when the children are early-to-mid elementary school.  They can now ostensibly walk more than a few feet, but only when motivated by cool rides, games, shows, gift shops, cotton candy and other overpriced sugar and plastic, and various other things that I would categorize as Gimmicky Clap Trap.  Presumably the children will be so excited by all the ways to spend their parents' money on worthless crap that they won't complain.  Ours do, but most children don't.  At least not in the advertisements.

Stage Three--National Parks.  You do this when the children are late elementary-middle school.  They can now ostensibly hike and appreciate the natural world.  You Go West and show them the wonders of America and spend time walking and talking and bonding as a family.  Presumably the children will like this, but I would not count on it.

Stage Four--International Travel, to include Europe.  You do this when the children are in high school, if they are still speaking to you.  They can now ostensibly understand that America is not the only country, get something out of a five-hundred-year-old cathedral other than there are dead people underneath it, and appreciate that in other cultures, people eat things that don't come out of a box.   And if that doesn't work, you can tell them that the boys/girls in Country X are extremely attractive and also that there is WiFi.

We have indeed proceeded mostly a pace through these stages, although we are only now in Stage Two, and also I have thrown in Africa, because if you can get there in one piece, children ostensibly like animals and also I am from Africa so we are going there now and shut up.  Kevin knows not to mess with that.

My Theory of Family Vacations goes something like this: The children are going to complain and hate it regardless, so pick something that will keep the adults mostly happy and calm, preferably with built-in strategies of avoiding the children altogether.  The beach house thing was actually perfect.  You may recall that no one in my family actually liked the beach except for me, and I got to read a book by the ocean by myself for a solid week.  There were virtually no logistics and no crowds, both of which are the bane of my existence and in fact my anxiety disorder's number one and two triggers.

But now we are done with Stage One, per Kevin.  We are on to Stage Two.  In that vein, we took our second trip to Pigeon Forge, Tennessee over spring break.  So, if you haven't been to Pigeon Forge, it's like Branson, Missouri.  If you haven't been to either place, it's like a family-friendly version of Vegas.  If you haven't been there either, pick a scenic location and then carpet bomb it with expensive, tacky-looking, low-brow-culture attractions and activities that obscure all natural beauty in the vicinity and remove any temptation for vigorous outdoor activity.  Like take the Sistine Chapel ceiling and paint cute, hot pink, faux fur vests on everyone and give them all pet yellow flamingos and laser guns.  In the case of Branson and Pigeon Forge, add 50,000 American flags and God, as if he couldn't already be experienced in the majesty of the surrounding mountains.  Oh right, you covered those up with mini-golf.  Make the mini-golf a Stations of the Cross theme.

We went to Pigeon Forge in August for a few days, and the kids actually seemed to enjoy it, which was confusing.  So Kevin decided we should go back.  I decided that since Kevin had decided this, he would get to plan and execute the entire thing.  Which was brilliant.  I left all the logistics to him and remained mostly emotionally divested in the success of the trip.  I still didn't really enjoy it, but I didn't have a panic attack either.  There were a few moments when we were 30 minutes behind Kevin's stated schedule that I started getting heart palpitations, and then I reminded myself that I DIDN'T WANT TO DO ANY OF THIS ANYWAY so it should not matter to me if we were late.

Last time we had stayed in a cute, quiet cabin with a view of the mountains and at least did one outdoor activity (a raft trip).  This time Kevin decided to go full-on Tourist Trap.  We stayed in a massive hotel/indoor water park/arcade.  This involved pressing the flesh with millions of people everywhere we went, inhaling massive amounts of chlorinated air, begging Lawson to try a water slide, and spending $50,000 on video games that earned the children enough tickets to purchase a whoopee cushion and a few packets of sugar "dip"/Kid Cocaine. 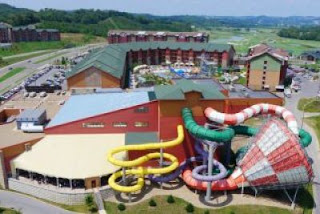 Other activities we did:
1) The Alpine Slide.  I must admit this is pretty cool.  It is a bobsled ride built on a mountain.  Not only is it a great ride, you do actually enjoy some scenery.
2) A mirror maze. There are quite a few of these in PF, and I don't recommend them if you have an anxiety disorder.  It's endlessly confusing, frustrating, and dizzying, and you think you'll never get out.  It's basically like living through the Trump Administration, which I do not consider a vacation activity.  I think I might have cried out for Bob Mueller a few times.
3) MagiQuest.  This was the kids' absolute favorite, although it was so emotionally involving, everyone melted down at some point.  It's hard to describe so google it.  For me, it entailed following Charlotte all over these three big rooms looking for stuff and trying to help her solve riddles for hours at a time.  I had it easy though, because Kevin was Lawson's escort, and his time was spent talking Lawson off various ledges of frustration that were then compounded by Kevin's attempts to help him, a fun "I can't do this!"-"Let me help you"-"I don't need your help!" loop of despair and insanity.  Then we all spent like 2 hours trying to defeat the last dragon without success.  That thing is rigged. 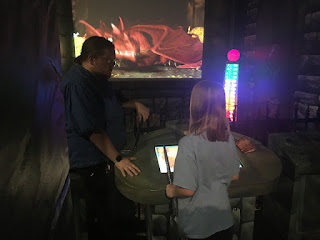 Charlotte battling one of the dragons.

3) Some kind of jurassic boat ride where you are terrified by fake dinosaurs.
4) Some kind of VR laser game where it feels like you are on a run away train and are shooting at bad people.
5) Ropes courses, laser tag, mini golf. More video games.
6) Shows. This time we went to Dolly Parton's Stampede, an impressive horse-trick-riding show that comes with a massive plate of meat.  Also, America.
7) An escape room.  In this case, we had to bust out of Al Capone's apartment before he came back and killed us.  This was fun for the adults and one child, but Lawson was unimpressed.  He wanted Al Capone to actually come back and kill us.

Things we did not do:
1) The Titanic Museum, complete with massive replica of the Titanic.  Because everyone knows Pigeon Forge, Tennessee was integral to the story of the Titanic in that one of the passengers passed through there once.
2) Hollywood Wax Museum.  Because who doesn't want to pay $50 to see wax statues of celebrities to you can pay $5 to see in a People magazine?  I seriously don't get wax museums, but they seem to be a fixture in any place with ambitions of tourist-trapdom.  There's even one in Gettysburg.  I don't get the thought process there--the deaths of tens of thousands of people and the turning point in the fight for the very future of our nation isn't compelling enough so you add a wax Robert E. Lee and that makes it exciting?  I don't get it.
3) Dollywood. I know, going to Pigeon Forge and not going to Dollywood is like going to Rome and skipping the coliseum, and yes, the two are of equal cultural importance.  But we've done it twice.
4) Christmas Village.  There is a massive store and hotel complex in which it is always Christmas. Don't get me wrong, I like Christmas just fine, but I don't usually find it a vacation.  Also, I highly doubt Jesus would approve.

And of course....
5) HIKING IN THE BEAUTIFUL MOUNTAINS.  Which are so beautiful, people.  And it was Easter weekend with perfect weather.  But according to Kevin's Theory of Family Vacations, we were not yet ready to hike in a national park.  So I simply stared forlornly at the mountains in the distance, trying not to notice that even my kids were not completely happy--certainly they were not enchanted, the way kids in commercials for all these places are--doing all the crap they supposedly wanted to do.  I can't imagine they'd be any less disgruntled in the wild.  And I might actually have a good time.  Someone should. 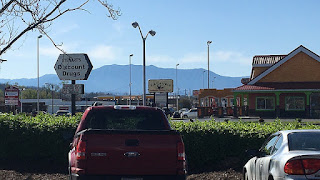 There are mountains in them there signs if you look close.