Why I Am Medicated, in Five Photographs

Instead of having a panic attack at the state of my house, I decided to do some war zone photography* and then analyze each photo objectively as a way of disabling my anxiety.  Fun!
(*Sensitivity training caveat: I am not implying my house is as bad a war zone or that my anxiety compares to PTSD.  The sad thing is, to me it probably is, because I am that pathetic. You would not want me in an actual war zone, trust me.  I would not survive long enough to get PTSD. Trust me.) 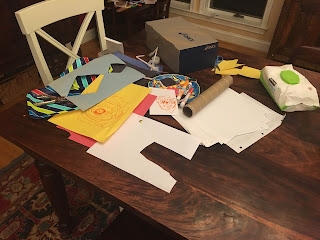 I call this, "The Remnants of Genius, Plus Some Sad Babywipes, As If There Will Be Any Cleaning Up Done By the Perpetrators."  This is Lawson's art desk.  Or rather, it is half of it.  It is also theoretically our dining table.  His supplies include: a shoebox, a paper towel roll, leftover birthday plates, scotch tape, markers, paper scraps, and also just unmitigated trash.  None of this is to be rearranged or thrown away, NONE OF IT. 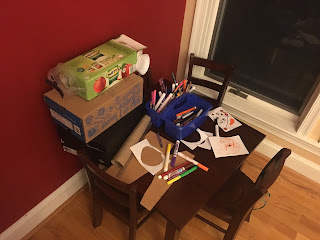 This is "The Artist's Actual Desk That He Never Uses/Storage Space for Completed 3D Trash Sculpture, Plus a Sad Caddy Full of Supplies As If Anyone Will Ever Return Them There."  The stack of boxes is: a shadow box full of pipe cleaner monkeys; a shadow box full of trash; some trash fashioned into a crude sort of pig with money in it.  And some trash.

This is "The Ruins of a Long Defunct Storage System, Dismembered Toys, Assorted Leaves and Sticks, and Throw Blankets That Mysteriously Insist on Living on the Floor."  When I really have a meltdown, instead of calmly walking through my house photographing the destruction in evocative lighting, I sit on the floor, covered in throw blankets, and put all the toys in the correct plastic bins while having imaginary arguments over Obamacare with people on Facebook. 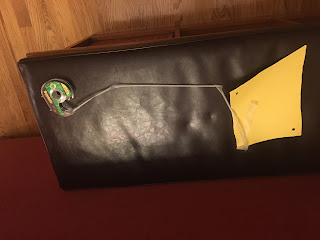 This one  is called "A Kite Made Out of Scotch Tape Or, It Turns Out You Can Make Everything Out of Scotch Tape So Let Us Try." Lawson goes through several rolls a day, using it to seal off couch cushions, fashion dragons out of Hershey's Kiss wrappers, and resurface the floors.  At times, he cordons off entire rooms.  I should just get crime scene tape and call things what they are. 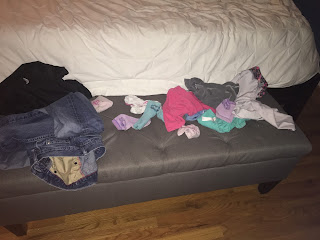 This one is called, "Laundry Decomposing," or alternatively, "I Can't Even Rely on The First Born To Keep Me Sane."  In theory, she puts her own laundry away.  Like almost all theories in the social sciences, it is ethereal and without any real proof.


There you have it, my mental health in living color.  Pretend each piece of ambiguous trash depicted is a snake/spider/serial killer/flesh eating bacteria/zombie/Republican/Democrat/crashing airplane/pile of pollen/top of a jillion-story building/terrorist/refugee/FILL IN YOUR BLANK and you get the picture.  Or actually five of them.