The internet, to include social media, can be a dangerous thing.  You can find all manner of stuff you absolutely must have on the internet, then social media will egg you on.  Then you will buy it and realize it is a piece of crap that has cost you a butt load of time and money and may actually kill one of your children.  Bottom line:  This epic disaster is the fault of my Facebook friends and none of my own.

So Lawson needed an actual bed.  My initial (wise) plan was to just get him a regular bed that he could sleep in until I kick him out of house at age 30 and tell him to stop playing video games and get a life.  But then I came across this:

Oh so adorable!!  Then I put it on my Facebook page--What do y'all think, you people who have absolutely no stake in this decision?  Well, they think it's adorable!  Of course you must buy this for your little boy!  The only naysayer was Grandma, who noted its construction out of plywood and wondered how sturdy it might be.  Silly Grandma!  Lawson weighs like nothing! Playbeds don't just collapse no matter what they are made from!  And besides, this was coming from the woman who is convinced our wisteria vine could strangle us in the night.  She is a professional worrier.  I'm getting this bed!

After waiting forever for the bed's delivery, a truck came and literally dumped a pile of painted plywood pieces in our driveway and drove off.  That was the first sign of trouble, to be quickly followed by the second sign--There were no assembly instructions included.  Followed by the third sign--there was no hardware included.   It was basically a big ole pile of plywood.  So I emailed the dude in Georgia who made it (and who had previously assured me there would only be "light" assembly).  Hey, dude, um, where are the instructions? Hardware?  Oh no problem he said, I'll send them, and he did, and I thought, problem solved.  At that point, I did what any woman would do, I left town and told my husband and one of our guy friends--who I might add is a military officer who served a tour in Afghanistan, he's very capable--to assemble it.  I felt pretty good that this firetruck bed would be no match for folks who had battled the Taliban and solved the Euro debt crisis.

Well, it turned out the Taliban might have made this bed using French union laborers.  There were a few problems. First of all, the hardware the dude sent did not go with the actual firetruck bed.  I'm not sure what it did go with, perhaps the space station, but it did not go with the bed. Secondly, the instructions consisted of a few hand-drawn-looking pictures of a firetruck.  Gee, thanks, I wasn't sure what a firetruck looks like but now I know.  I still don't know how to build a firetruck bed, but at least we have agreed upon a vague concept.  Third, there were some pieces missing, because that way the construction is more challenging and fun.  And fourth, both Kevin and Dan have other full-time jobs. The one bit of good news was that I was safely in another state and therefore could not be bludgeoned to death.   So that was fortunate.

Kevin and Dan labored an entire day on this thing, and they basically MacGyvered it, I'm not exactly sure how.  But they didn't quite finish it, and when I got home, there was still no apparatus to actually hold a mattress in the bed, and apparently none included in the pile o' plywood, other than like 3 wooden slats.  Kevin went to Home Depot and bought more slats, but when we lowered the mattress onto it half of them shifted and fell to the floor.  Not to mention when an real human being sat on the bed, the whole thing shook as if it had spontaneously come down with malaria.  Needless to say, it did not inspire a mother's confidence.  Unfortunately, Kevin at that point did have to go to his real job, and the task of salvaging some kind of sleeping arrangement from this fiasco fell to me, who definitely deserved it.

Long story short, I went and got a box spring, and after first trying it out on the slats, which again collapsed, I wedged the box spring down into the bed frame and onto the floor and put the mattress on top of that.  The whole thing still manages to creak some, even though the actual part of the bed that a person would sleep on is not at all attached to the frame, but at least I know there is no way it will fall in on my toddler in the night.  Well, I wouldn't say there is NO way, but it's unlikely.  He is more likely to be suffocated by the 50 train engines he insists on sleeping with.

So Lawson has his firetruck bed, which he almost certainly will not appreciate enough to offset the time and energy and money it took to get it for him, and it still may try to murder him in the night.  And, of course, it is all your fault, Facebook friends!  Next time, just stay out of my bed-buying decisions, OK?  Thanks.

All's well that ends well (and I think he will be sleeping in this til he's 30 because I have no idea how we will get it out of that room): 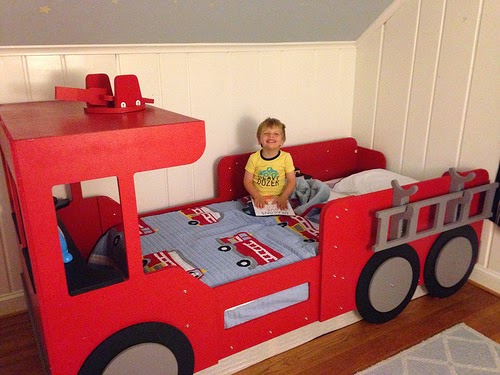 UPDATE 7/2020: He did not sleep in the bed until he was 30. He in fact only slept in it about one year, at which point he decided it was "scary" and preferred to sleep on the floor on a pallet his grandmother made him (why, Mom, WHY).  He slept on that pallet for about 2 years, at which point he demanded a different, "normal" bed, which we bought him.  We gave away the firetruck to some dad on Nextdoor who disassembled it in 15 minutes and carted it away.