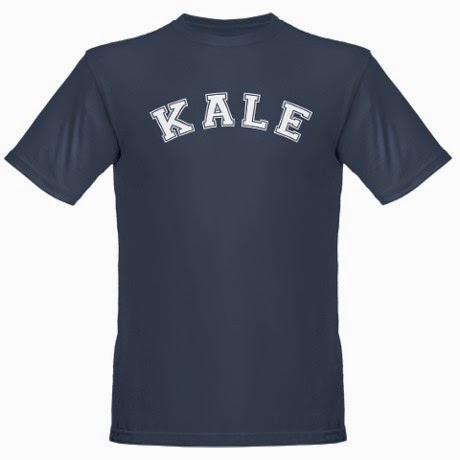 OK, "Revolution" is a bit of an exaggeration, unless by "revolution" you mean change on the level of Rice Krispies now having even more snap, crackle, and pop, if you listen really really close.  So, yeah, in American marketing terminology, we've had a revolution around here.   As a refresher--according to the original plan, which has of course been all but thrown out the window, February was meant to be the month I was going to get my kids to get something other than chicken nuggets.  February was reassigned to potty-training, March was taken up by my marathon and recovery (hey, if I'm gonna run 26 miles, I should not be expected to accomplish anything else for at least a month), so April was nutrition month.  And probably May, too.  Yeah, it's gonna require May, especially since May is somehow half over (how does this keep happening?)

And I don't have a whole lot to report, at least not on the kid front.  I, on the other hand, have discovered kale.  And quinoa, no less.  The yuppie pressure finally got to me, just like it did with Downton Abbey and House of Cards (I refuse to watch Game of Thrones, however. I don't do the fantasy genre, there's too many details to keep track of.  I need everyone to at least be human).  And guess what? I adore kale.  I have been eating kale almost every day.  Smoothies, sautees, salads.  KALE.  I do like the taste, but what I really like about it is that it stays somewhat perky in the fridge for much longer than other kinds of lettuce, which gets that slimy, wilted look that is just yuck.  And when it does start to go limp, you can always cook it or blend it.  Anything that saves me from going to the grocery store every other day is my friend.  Quinoa is also pretty cool, although I am not finding it quite as versatile.  But I do feel very healthy and hip when I eat it. I even know how to say it properly.  Keen-wah.  Wow I am successful.  Unfortunately, I have also discovered Trader Joe's dark chocolate covered almonds, the consumption of which began as a healthier way to indulge my sweet tooth but which has now become a raging addiction and 3 extra pounds on my butt.  Once again, I have proven myself to be a sugar addict for which complete and utter deprivation is the only remedy.

Sadly, Charlotte nor Lawson have eaten neither kale nor quinoa (Charlotte does like the chocolate covered almonds).  Well, they might have eaten one bite of an egg casserole I made that had quinoa in it, but then they realized it was not chicken nuggets and that was the end of that.  I have been cooking more, and I may have permanently added a couple of things to their repertoire.  Charlotte shockingly scarfed down shrimp tacos--Seriously, the kid will not touch mac-n-cheese but she just can't get enough of shrimp tacos.  Lawson is holding out for chicken nuggets, and he can go days at a time, too.  The boy really needs to join a protest movement of some kind because he would be amazing at it.

I got a huge boost in my efforts from the Nazi pediatrician, the same one who is all judgy about television watching among other things.  We went for Charlotte's 6 year check up, and he asked her if she ate her veggies.  She looked sheepish and admitted, no, she had never met a veggie she would actually eat.  He said, "Well, OK, that's fine.  But just so you know, I'll have to give you a veggie shot next time you come in here.  Yeah, they hurt really bad too.  But I can do that."  Her eyes just about bugged out of her head as she desperately inquired what she needed to do to avoid such a horrible fate. He told her she needed to eat at least one serving a day.  She took it on board, and guess what? She is still eating a few veggies a day.  Not kale, mind you, more like carrots drenched in butter and sugar, but still.  Thank you, Dr. Goldman.  It's about time you stopped judging me for doing things that you yourself would totally do, too, if you were a stay at home mom because you would be losing your freaking mind, and actually started being useful.

We are going to keep trying.  One of these days, after the kids have seen me eating a kale salad for the two millionth time, they are going to cave.  Mark my words.

An update since I started writing this post like 3 weeks ago and am now too lazy to rewrite it:
My friends, there are signs the tide is turning, and the allies have gained the upper hand in the Food Wars.  Last week, my children ate broccoli AND cabbage AND, even more miraculously, declared it "delicious."  I haven't been so moved since the Oprah show finale.  I shed tears.  Of course, there is the distinct possibility that they were toying with my mind in their ongoing denial and deception campaign that aims to...they actually have no aim that I can make out, they seem to just enjoy torturing me for its own sake.  Tonight I made cabbage and broccoli again and got no such rave reviews.  But I will persevere my friends.  And I. WILL. WIN. THIS. WAR.