When I was preparing to have Charlotte, one thing that really scared me was all the stuff one had to acquire for a baby. I tend toward the anal, and houses around here aren't that big, so extra crap lying around really gives me some hives. I noticed early on that most parents own like 14 strollers, many of them as big and expensive as a Hummer and as luxurious as a Lincoln Town Car (Seriously, strollers are soon going to become equipped with DVD players, GPS and cruise control--they already come with iPod jacks--you just wait). I queried my parent-friends how I might avoid this fate and get away with owning only one, basic stroller. I got a lot of confused looks. I just didn't get it. So I settled on buying a "snap-n-go" on which one's infant carrier/car seat fits and thought to myself, "Done." So naive. So very naive.

Flash forward 3 years and I just acquired my 6th, that's right, 6th, stroller, on craigslist. Which can I just say that acquiring a stroller on craigslist, especially of a certain brand, is on par with climbing Mt. Everest while chain smoking. Or actually more like an Olympic Decathalon where all the athletes are on steroids and crystal meth, since it is a competitive sport for sure. You go on there, you locate what you are looking for, you carpet bomb every eligible entry with inquiries, and maybe, MAYBE you get one reply from someone who posted their ad like 6 nanoseconds ago. Then you had better drop whatever you are doing--like seriously, if you are on the pot, you need to stop peeing midstream--throw your kids in the car and haul a** over to whatever location they instruct, hopefully to beat out the other crazy desperate moms and hopefully not to be murdered by a Phil-and-Teds-peddling serial killer (for those who are not parents, Phil and Teds is the holy grail of strollers, but I will get to that).

So how and why do I possibly need 6 strollers? Before I run down the litany of acquisitions in my own stroller odyssey, let me try to analyze for the confused what motivates a parent in their stroller quest. Most basically, moms keep buying strollers in the endless pursuit of the "perfect stroller," one that hauls all of one's children in comfort, as in they each have their own space big enough to live in comfortably for several days, in a contraption that can fit down a store aisle and fold up small enough to fit in the glove compartment of one's car. Maybe it can also change a diaper. In other words, it doesn't exist, much like the perfect man doesn't exist, even if he seems perfect at first, he will inevitably give your child strap burn or start veering to the left or become to heavy to cart around comfortably and you will be back trolling on craigslist.

More specifically, there are 3 reasons moms keep buying new strollers (or new-used ones):
1. You have more kids or your kids get bigger. As we all know, American children in the 21st century are unable to walk. It's true. Chinese toddlers are no doubt walking 23 miles one way in the snow to Montessori school. American children, on the other hand, must have a stroller until they are able to drive a car. So you really need to get a double or, if you are so crazy or unfortunate to have more than two kids, a triple stroller than can accommodate someone who is 5'6.' Just in case your 13 year old gets tired at Disneyland.
2. You bought the cheap stroller but then you see that all your friends have the kind that you can push with your pinkie finger and your kids are so comfortable, you can leave them in there until they graduate middle school. And you think to yourself, I must have that. I must either spend my children's college fund to buy that new or I must kill some people on craigslist.
3. You happen upon an occasion for which your stroller/s are not well-suited. There are three broad categories here--you got your out-on-the-town stroller, you know your stroller for when you lose your mind and think you'll just run to Target with your kids; your around-the-neighborhood stroller, which is typically a massive, 4 wheel drive, jogging stroller of some kind that lives on your porch and performs the secondary function of scaring away potential burglars; and lastly your exciting-adventure-Cadillac stroller, in which you take your kids on exciting outings to farms and Disney World and other places where they have animals and people in costumes. The latter kind of stroller we don't own, because as you know, we make it a rule not to go ANYWHERE with our small children, for the good of humanity.
So those are the basic drivers. Of course, you have to have strollers of every type for one or multiple kids as well. This starts to add up to enough strollers to fill an 8 car garage.

Now we are ready to recount my own stroller story. I will include pictures for added interest (or for any kind of interest):
1. As I said, our first stroller was the snap-n-go.

What I didn't know when I determined this was the only stroller I would ever need was that it is rendered useless once the child has grown out of the infant car seat, when they are about 25 lbs. This takes about 5 minutes for my kids. So then I bought a...
2. Cheap regular stroller. This was a hasty purchase, not well researched (a stroller purchase requires more research than the average dissertation), and didn't last long (I sold it on craigslist of course). This stroller was rejected because it did not fold up into a small enough area to put easily into my car and it did not have shoulder straps to secure my infant, thus endangering her life. I won't post a picture because it doesn't deserve one.
3. Single jogging stroller. This was given to me and has been used to go on walks in the neighborhood. I decided I had, HAD to have a jogging/multi-terrain stroller because our neighborhood has a few unpaved walking trails that I might want to walk on with my child sometime. You know, on Fridays in May when it is sunny, but not too sunny as to burn my little cherub, and between 72 and 78 degrees. There's a stroller for that. And this is it. 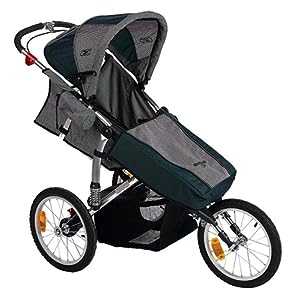 4. Expensive regular fold-up stroller to go in my car and replace the cheap regular stroller I sold on craigslist. I saw a friend with this particular brand and I just HAD to have it, I really don't know why, it's not that impressive, it's not like it can make air travel with small children bearable or anything miraculous like that.

5. Now we are moving into double stroller territory. Now, every mom, EVERY mom in my church group that has more than one kid has a Phil and Teds. Everyone breastfeeds, everyone cries in share time at some point, and EVERYONE owns a Phil and Teds. Those are the rules. The Phil and Teds are amazing, because they can convert from one to two kids and back again and they are double decker so very compact.

The downside is they cost more than a car, and forget about getting one on craigslist. The second they are posted, the seller's house is swarmed by moms with their own SWAT teams. So imagine my delight when I located a very cheap one on a listserve and actually made it to the woman's house in time. I was so busy salivating over it I did not test it out and notice that one of the axels was broken. No matter, I bought a replacement part. But it still didn't work, veered to either side. Long story short, I replaced all the wheels and axels and got it working decently well, not great, for a reasonable cost. Then Lawson arrived. We configured it for a toddler on top and a baby lying down in the bottom. We put him in it. He screamed as if we were forcing him to watch Barney. And he continued to scream for the entire walk. He did it again the next time. What can I say, he likes to see the sky and has acid reflux. So Phil and Teds, not his thing. But no matter--I can sell it on craiglist easier than I can eat an entire carton of mint chocolate chip ice cream in one sitting. But I think I'll keep it for now, I am sure there is an occasion where I will need a double-decker stroller for two, maybe a funeral or wedding.
6. So that brings us to our last acquisition, the double, side by side jogging stroller, so I can take both Charlotte and Lawson on walks in the neighborhood, on unpaved paths, on Fridays in May, when it is sunny but not too sunny and between 72 and 78 degrees, and Lawson can see the sky and be happy. The End. It's not the Rolls Royce of double strollers--that would be the BOB Revolution, and yes, it IS a revolution people, so don't mess--but it will do just fine. I hope. Otherwise I will have to buy another stroller.

All told, I've probably spent more on strollers than some countries spend on education. But I can take my kids places. If I want to. Which I don't really, it's too much trouble.

Parting shot, I title it "Strollers in the Mist." 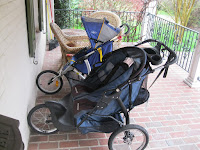