Well, it's a done deal. I am now a mother of two children (Incidentally, I have written this post the way I do everything these days, in 5 minute increments over the course of weeks). For those who somehow missed the email, the Christmas letter, and both mine and Kevin's Facebook announcements, Lawson was born on December 16 weighing a whopping 10 lbs, and thank God because that explains the extra 20 pounds I packed on. OK, maybe it only explains an extra 3 pounds, since the average baby is somewhere around the 7 lb mark, but I will take anything I can get.

For those who have been waiting in anticipation for me to recount with attempted comedic effect the horrors of the last month, well, you will be disappointed, I'm happy to say. Everything has gone surprisingly well, miraculously well even. In fact, the last month has been so full of miracles, I think I should apply to the vatican for canonization upon my death. I guess it would be me who is responsible for the miracles anyway. Not sure on that, or if simply being responsible for a miracle qualifies you, or if you have to be a decent person on top of that. I'm Presbyterian now, which means I don't have to try too hard. Anyway, let the Pope consider these uncanny events before he decides:

MIracle #1: Lawson is as good a sleeper as Charlotte, if not better. Charlotte, you will recall, was sleeping 8 hours straight by 4 weeks or so, and 12 hours straight by 8 weeks. Of course, in weeks 1-3, she only slept an hour at a time, but that is because she was starving. People said there was no way, NO WAY we could possibly have another baby like that. But Lawson, whom we stuff like a pig before putting him to bed, did 8 hours at 2 weeks. Now he typically only does 6 at a time, but we know he is capable of greater things. What can I say, we birth sleeping geniuses.

Miracle #2: Despite Charlotte getting sick twice and Kevin getting sick once, Lawson nor I ever got sick. Kevin's illness was a near disaster averted by Kevin's mother's miraculous last-minute flight across the country, the day after Christmas, through a would-be blizzard. Maybe she is the one who should apply for canonization. She has the good person thing going for her as well, despite being Lutheran, a denomination that similarly emphasizes grace over works. Which makes her even better, since she is a good person without even having to be. Wow. In any case, I only had to take care of both children by myself for about 6 hours. Of course, that was enough to occasion a hormonally induced meltdown, but it wasn't too bad.

Which brings me to MIracle #3: I have only had a few meltdowns/psychotic breaks/strokes in the last month. In addition to the aforementioned one, I of course lost it when I first weighed myself upon my arrival home and realized that, despite birthing a 10 lb baby and all his accoutrements, I had only lost 10 lbs. (which I didn't think was scientifically possible, meaning this is possibly another miracle, only not the happy kind). Apparently I was retaining a lot of fluid that soon exited my body, but still, a meltdown was in order. I also had not so much a meltdown but a crabby outburst over my mother-in-law's relocation of the package of baby wipes from our dining room table, which is apparently an offense on par with serving pork barbeque in Texas. But in general, I would say I have been relatively sane, which is an accomplishment for me even under normal circumstances.

Miracle #4: Charlotte actually likes her baby brother, even if she is a little bored by him and was forbidden by her father to be in the same room with him for much of the past month due to her germs. Nor is she able to do much to help with him, much to her dismay. Her big contribution as a big sister is to pat his back and turn on his toy during the dreaded Tummy Time. It's very sweet. She even seems to accept that most of Mommy's time and attention is now devoted to him. There have been no attempted murders or suicide threats on her part, at least not directly related to him, just for all the normal things, like being served meatballs instead of chicken nuggets. That is apparently a MUCH bigger deal than suddenly having to share your parents with another child.

Miracle #5: And this is the biggie: I AM STILL BREAST FEEDING. And it is going WELL. I know. I am a little freaked out by it, as this really calls my entire identity as a mother into question. I do maintain that I don't like it, I will never change my stance on that. It is indeed like living life as a chattel slave. The main reason it is going well is that we are not perfectionists about it this time. We give him bottles at night, ensuring that everyone gets some sleep. This has made all the difference. But I am breast feeding him during the day. I am trying to stay focused on all the money we are saving. In fact, when I go back to work, at which point I am definitely quitting, I think I will calculate exactly how much money that is, and then I am going to take that money to an outlet mall and buy a bunch of clothes once I am back to my normal size. Or actually, since it will probably take me a decade to lose all this weight, I could invest the money in a high yield mutual fund, and assuming the economy recovers, I could buy myself a new wardrobe AND a ranch in Montana. Eyes on the prize.

Of course the biggest miracle of all is Lawson himself. Take a look at this handsome fellow! 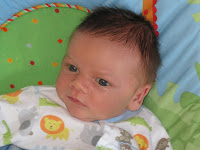