A Daddy's Girl is Born...Finally 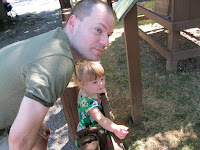 My life has gotten a little bit easier. And just in time, too. Although I am not due to give birth for another 3 1/2 months, I am already as big as that massive Pillsbury Dough Boy that destroys New York City at the end of Ghostbusters. The ground similarly shakes when I walk. And I officially outweigh my husband (of course, I outweighed my first husband after a large meal, but this was in fact a major reason for our divorce). When people ask me when I am due and I tell them December, I get an incredulous, "Oh Wow," with the more sadistic ones adding, "You've got a long way to go!" Thanks, I'm still on the Mayan calendar and had no idea. So after initially thinking I would not end up weighing more than some NFL players like I did last time, I am now preparing myself for the likelihood that Richard Simmons will have to come and knock out a window in our house with a bulldozer just to get me to the hospital. I really dread that, he's so annoying. And my back hurts.

So it's getting pretty tough for old Mommy to get down on the floor and play Little People, swing around 30 lb children, really do anything but sit with my feet up. Charlotte has wisely concluded that I am no fun anymore, and that Daddy is where it's at. I have been living for this day. As everyone knows, her central goal in life up to this point has been to have some part of her body touching me at all times. Daddy has been of little interest to her, she in fact has shunned him on many occasions, the lucky dog. I would sell my soul to be shunned.

But fortunately, it did not come to that, for my shunning ship has come in. Charlotte is now obsessed with Daddy, and who can blame her, really. He's devastatingly handsome, charming, smart, funny, even tempered, and can discuss the federal deficit at length. Most importantly, he does not have a tiny human resident draining his life force. He can still wrestle on the floor, play the upside down game, and dive into a ball pit with abandon. He could even shave his legs without risking his life, if he so chose, although I suppose this skill has little use for Charlotte. When he comes through the door, Charlotte immediate attacks him, hauls him off to our room, demands he remove his tie and shoes, then drags him upstairs to play where Mommy will not bother them (really, Charlotte, you don't need to go that far. Give me about 5 inches and you won't even know I'm here). If I attempt to come, I am told to "move away" and "stay downstairs." These are the sweetest words I have ever heard.

Of course, Daddy is only around for about 15 of Charlotte's waking hours, so i am not quite out of the woods. Then again, in another month or so she probably won't be able to fit in the same room with me, so things could still work to my advantage. Like a natural toddler barrier system.
Email Post