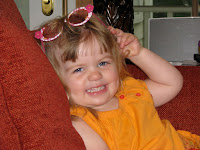 The unlikely face of an elite government operative

Government sources, who decline to be named due to the sensitivity of the information they are providing, have confirmed the existence of a top secret program that employs a two-year-old to help interrogate terrorist suspects at Guantanamo Bay. According to the sources, a Virginia toddler named Charlotte has been helping officials at the detention facility for the past month, wearing down alleged terrorists with incessant whining.

The program has thus far been highly successful. Charlotte has reportedly broken 9 out of the 10 detainees with whom she has assisted (the 10th detainee is deaf). Sources say after hours of listening Charlotte beg, scream, yell, cry, and prostrate herself on the ground for various items, including goldfish crackers, raisins, Elmo, and the Wonder Pets--even after the items were given to her--the detainees revealed the details of plots to attack the US Capitol, the White House, the New York subway system, and Heidi Montag, who reportedly paid to be blown up for the publicity (Her publicist says she will launch a media tour this week to deny the allegations). They also gave up the exact location of Osama bin Laden, but sources say the government has not yet acted on the information because he is allegedly co-located with several bongo, a highly endangered antelope species from East Africa.

The Charlotte Project was reportedly launched in 2009 in the context of the Obama administration's strict prohibitions on interrogation techniques that border on torture, such as water boarding. "We really had to think creatively," recalls one of the sources, a military interrogator. "We held numerous brainstorming sessions, in which we asked ourselves, What is the psychological equivalent of a physically excruciating technique like electrocution?" The officials, several of whom are parents of small children, eventually came to the conclusion that the maddening behavior of toddlers, particularly the over-indulged American kind, held the key to breaking the world's most dangerous criminals.

The next step was finding the perfect toddler. Government officials secretly observed parks, playgrounds, and daycares in the DC metro in search of a child with elite skills in psychological warfare. On a visit to the National Zoo, they found their man, or in this case, a blonde, blue-eyed, dimpled, 30-pound package of mental torture. "Whatever Charlotte's mom was doing, it wasn't acceptable. She wanted crackers until she had them. She wanted to walk when she was in the stroller and wanted in the stroller when she was out of it. She wanted to see the cheetah when she was viewing the lion and the lion once she was at the cheetahs. We watched her mother slowly lose her mind." She finally buckled Charlotte in the stroller and walked numbly into the woods, Charlotte screaming at her. The officials actually had to intervene to get her safely back to her vehicle. Charlotte's mother's cooperation with the project was not difficult to obtain. "She basically had two questions: Will my child be harmed in any way? and Can I be on a government-funded cruise while all this is going on?"

Leaks about the program have aroused the ire of human rights activists, who claim the technique subjects the detainees to inhumane treatment and is indeed torture. Charlotte's mother reportedly agrees (but is enjoying her cruise too much to formally complain). The Justice Department is investigating.
Email Post