As one of my ongoing "nesting" activities--which, this time, I intend to accomplish BEFORE I qualify as a body double for Free Willy 8 and have to scoot along the floor to pull up my pants--is culling through all the baby and kid crap that has bred like rabbits in this house and getting rid of things that did not live up to hype. That pretty much describes about 90% of it. Honestly, if you want to get rich quick, forget the lottery, forget Amway, forget flipping real estate during the next housing bubble, forget becoming a Kenyan Member of Parliament. All you really need to do is think up a baby product, then--and this is the key--market it as something that will buy the parent sleep/time/peace/quiet/sanity. The product can honestly be a piece of plastic you found on the floor of your Beijing hotel, and the marketing has to be only slightly more convincing than Michael Jackson's nose job. The most desperate people in the world are parents, and desperate people make very very stupid consumers. Look at the weight loss industry. Does anyone really believe that 5 minutes per day with a vibrating dumbbell will turn your George Wendt body into a George Clooney one? The answer is YES, times like a billion.

The same goes for the baby industry. Just as an obese person does not want to believe that they will have to stop eating ding dongs and amputate the sofa from their buttocks, so parents cannot face the hard facts of their jobs, such as they will not get a decent night's sleep perhaps ever again, their toddler will not play with a single toy for more than 30 seconds, extended travel with a small child will be more painful than birthing breech triplets without an epidural, and dirty diapers will smell like, well, poop stored in a plastic bucket for several days no matter how many genies, filters, vacuums or other patented pending "disposal systems" are involved. It's a hard truth, but parenting, like obesity, isn't pretty and requires many years of hard labor to remedy.

But I am in no position to judge. If parents, and particularly mothers, are desperate folk, Phobic Moms are the most desperate of the desperate, the equivalent of Joan Rivers at her plastic surgeon's funeral. Certainly I have fallen prey to many many baby product pitches. After months of therapy, I am only now able to immediately throw away the One Leap Forward (name changed to prevent lawsuit) catalog upon its near weekly arrival. This catalog is a virtual Encyclopedia Britannica of Baby Crap with marketing so slick, televangelists study it in seminary. Here's just a few of their products I have eagerly purchased (do NOT judge):

1) Two or three versions of a foam wedge/mother's heartbeat simulator designed to improve digestion and soothe the newborn for a good night's sleep. After using each one, while trying to keep all other variables uniform, we spent hours analyzing, with charts, which one produced more sleep. The answer: none of them.

2) Diaper storage system with carbon filter. Powered by D batteries, a set of which the "system" runs through in a few days, this contraption supposedly circulates air through the pail. The carbon does something scientific. I still use the pail, but have long since given up on the battery-powered carbon filters. I don't have anywhere to store all those D batteries.

3) Mesh food bags that allow the baby to sucK on real food without the risk of choking. Charlotte's assessment was that they made everything taste like mesh, and she would rather choke to death, thanks.

4) Shampoo visor that kids just love to wear and that keeps soap and water out of their eyes. I bought this because Charlotte practically has a seizure every time I wash her hair, and despite being quite communicative, she cannot grasp that leaning her head back will allow the water to run away from her face. Physics is apparently not her best subject. She greeted the shampoo visor, which did not fit her head snugly enough to prevent a waterfall anyway, with another seizure.

5) Portable placemat that suctions onto "any table" and has a little trough that catches stray food. Minor problem: It actually suctions to "no table."

6) Baby toothbrush that babies just can't get enough of. Except that they can. And it only takes 5 seconds for them to get enough. Then they want it out of their sight forever.

7) Stroller shade extender that supposedly you can shape and turn to fully shade your child in any sunlight. Maybe I am just not good at shade-shaping but I never could get it to do anything other than look like a massive black duck bill that shaded nothing, as duck bills typically don't.

That's just a sampling. This isn't even counting the hundreds of toys I've bought, each one pinned with the hope that Charlotte would finally leave me alone for a few minutes. I've also bought every kind of sippy cup, plate, bowl, and utensil you can imagine in a determined quest to prevent messes at mealtimes (SUCKER!!!) I came this close to buying this hands-free breast pump holster before I decided it was better to just quit pumping. There are easier and cheaper ways to look and feel like a cow.

There is exactly one baby product (beyond the obvious needful things, like car seats and formula. oh yes, formula!) that actually did save my bacon. I will go against the expressed aim of this blog, which is not to educate anyone, and share it with you here. My friends, I give you the Kiddopotamus Swaddleme: 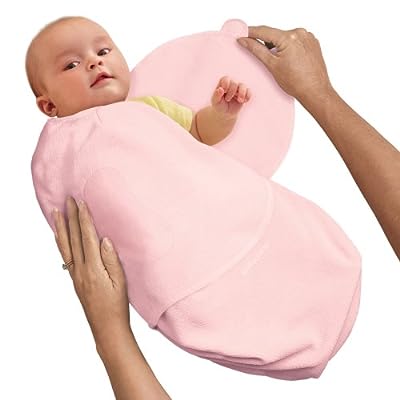 You haven't lived until you have seen two Ph.D.s on 3 hours' sleep huddled over a newborn baby and a regular swaddle blanket frantically trying to make the necessary folds and tucks to achieve the perfect swaddle. It isn't pretty. Fortunately, some genius that is deservedly rich somewhere invented this miraculous, life-saving device, which ranks right up there with the polio vaccine. I guarantee that anyone, no matter how phobic and/or over-educated they are or how little sleep they are on, can successfully swaddle any newborn, no matter how fat and squirmy, in less than 10 seconds. Seriously, find the inventor and give them a Nobel Prize, because I love him/her more than Bono. OK, maybe the same as Bono.

So to recap: Buy the swaddle blanket. Then STOP.
Email Post