In most cases, it's not a good idea to take behavioral cues from a two-year-old. Refusing to let anyone touch your hair, maintaining a diet of chicken nuggets and grapes, asking people the same question over and over until you get the answer you want or they go insane, peeing on yourself--not recommended.

But in one respect, I think little kids are onto something. Almost every toddler has a "lovie" or comfort item that miraculously calms them down in a crisis (well, some kids better than others). In Charlotte's case, this item is Bear. Bear is an essential part of our lives, so much so that we in fact have two Bears, unbeknownst to Charlotte. At least I hope unbeknownst; last time we switched out the Bears, for public health reasons, she gave the clean bear a stare so intense I thought he might crack and confess to being an impostor. She commented, "Bear...clean." I quickly explained that Bear had a bath and that was why he was so shiny. She gave him another withering look and moved on with her life. I fear, though, that she has in fact figured it out, and we will eventually fall victim to some kind of elaborate Parent-Trap-esque hoax involving the two Bears. I don't know what that would look like exactly, but that is precisely the point.

When things don't go Charlotte's way, she yells, "Bear! Bear!" and someone is expected to scramble and put Bear in her hands (We are starting to get tough now and demand she fetch her own Bear. Pretty risky, I know). She then takes a quick Bear "hit," holding him up to her face while she sucks her thumb, and before long, you would think she had just had a swedish massage. As far as I can tell, Bear is the toddler equivalent of pot or large quantities of alcohol (not that I have any personal experience with either; I have always perhaps wrongly assumed I need every brain cell I can get). He probably works faster and better than pot or alcohol, in fact. Five seconds with Bear, and Charlotte is a new woman. 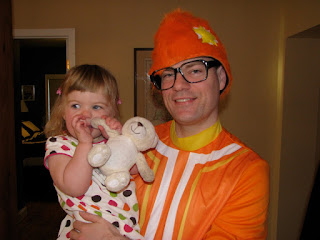 Relieving herself of the stress of her Dad looking like an idiot.

Which leads me to the obvious conclusion that one of the root causes of society's ills is that most people forfeited their teddy bears without finding a healthy substitute. Instead of years of therapy and rehab, maybe people just need to get them a bear. Better, maybe they need to go rooting through their parents' attics and find their original bears. Then maybe they need to sit their with their bears and suck their thumbs for a few seconds. I bet they won't need a drink after that.

And this brings me to the reason Yours Truly is such a healthy, well-adjusted human being. I never got rid of MY bear. Arthur has been my faithful companion through moves to Africa, years at boarding school, moves back to this insane country, a sucky marriage, graduate school, divorce, remarriage, and now, the ultimate stressor, Motherhood. When I bought Arthur at the age of 5 for $1 at the Goodwill with my allowance--which I earned the hard way, by breathing--little did I realize I was purchasing decades of mental health care. True, I have had to supplement Arthur with slightly pricier therapy at times, but I still maintain he has warded off all kinds of badness. He even got me through labor and delivery. He and a epidural, of course, I'm no fool. 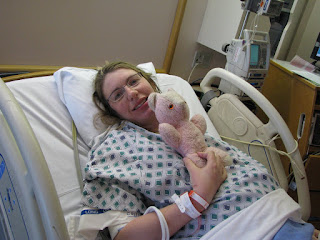 So you bet Bear will never be evicted from this house. I'm counting on him to make up for all my mistakes.
Email Post