The Phobic Mom does some light gardening

Three years ago, B.C. (Before Charlotte), we were a hip-hot-happenin' couple (in our opinion) living in a super cool, massively overpriced apartment in Yuppie Central, DC. We walked to awesome restaurants. We rode the subway. We bought organic at Whole Foods, usually as a result of not reading labels closely, but still, organic foods were known to pass our lips. And we had no yard, a blessing I did not fully appreciate at the time.

There is something about having kids that makes one want to homestead it in the burbs. Of course there is the practical issue of space; looking around our DC apartment, it was clear that if a baby were to move in, she would either have to sleep in a window box or I would have to get rid of most of what I affectionately refer to as my African Crap. And that really was not an option, since i break down emotionally unless surrounded by wood animal carvings. But the draw to suburbia is more powerful than simple logistics would dictate. When a member of the American middle class has a child, there's something deep within them that believes that unless one has a 3+ bedroom structure of some kind, some sort of large station wagon/SUV/minivan, and a yard, one's child will know how deprived they are and probably run away from home in search of a trampoline or a kiddie pool. Although I am less ridiculous than that, just for the record, because I have yet to own a station wagon/SUV/minivan and because ultimately I moved to the suburbs to save my African Crap and for no other reason. If you can't save Africa, you might as well save some African Crap. Just so no one thinks I am materialistic.

So long story short, we moved here. And we have a lovely house. And we have a lovely yard, even better, we have a relatively flat yard, a rarity in these parts. Here's the rub--we don't know how to care for our yard. And how would we? Kevin grew up with a Classic Mom, who cheerfully made his entire world perfect without him having to lift a finger. I grew up in Africa, with volcanic soil and year-round perfect weather and, more importantly, a cheaply employed gardner. The gardening I witnessed as a child involved someone putting a seed in the ground and weeks later the Garden of Eden descending. American gardening requires ever-so-slightly more skilled labor.

Everyone knows that the holy grail of suburban living is a perfect lawn. When we moved in, I employed a lawn service to come spray various chemicals on the lawn at various points thinking this would guarantee the holy grail. So the lawn service comes and does this. Well, they may just come and leave a flyer on my door saying they have done this, because I don't know if I can tell a difference. It is true we have fewer weeds. It is also true that when weeds die, they leave dirt behind. And if you had a lawn with many weeds, when the weeds are gone, you have a lot of dirt. Or mud, depending on conditions. This is what they call in the yard business "baldness," and according to society this is not good for yards or men, although I personally have no issue with it in men. Male pattern baldness never covered me in mud when I go out to play.

Kevin and I determined we had "baldness" last fall, when all the experts say you should rectify the situation with seeding. At that point, Kevin was still in charge of the yard. Kevin has many good qualities, but he also has a very demanding job and, in my humble opinion, poor time management skills. I've often daydreamed about kidnapping Kevin from his office and hauling him off to a weekend Steven Covey retreat, but I don't think even Steven Covey could help Kevin. So the yard did not get seeded. Fast forward to spring, and I decide to take matters into my own hands. I summoned up all my courage and went to the Garden Center, where my game plan was to locate an employee and plead with them for knowledge conveyed very slowly and in mono-syllables. I am not talking any garden center, this place is basically the garden center equivalent of a gothic cathedral. It is acres and acres of every kind of shrub, flower, tree, rock, soil and garden tool on the planet. They probably have a St. Bernard on retainer to find lost shoppers. I got out of my car and was immediately intimidated. I thought to myself, No place of business this vast and in a country with a minimum wage can possibly afford to employ the numbers of workers it requires to deal with a customer like myself. After giving myself a brief pep talk, I walked toward what appeared to be the main "store." I was within about 10 feet when I was swarmed with smiley helpful people saying, "What can I help you with today?" After hugging one of them, I explained my plight, "OK so my yard is about half bald. The area in my brain devoted to gardening of any kind is completely bald. Go." Before I knew it, I had purchased seed, fertilizer, a spreader, a bunch of flowers (might as well), and had a truck headed to my house with a buttload of top soil. And I had spent $200, which pretty much solved the mystery of how they can afford such great customer service.

All I had to do now was rake up the ground, mix in the top soil, and apply fertilizer and seed. The Garden Center man proclaimed this "an easy project." I found it to be slightly more taxing. On the other hand, there is no better way to shame a man into work than a woman pathetically attempting hard manual labor in front of him. Kevin, the same Kevin who up until now had taken zero interest in my seeding ambitions, not only came out to help, he largely took over the project. We raked our arms off. We hauled countless little red wagons full of dirt from out driveway to the back yard. We raked some more. We spent the better part of a day on this. Since then we have watered and watered and watered.

And this is what we have to show for it: 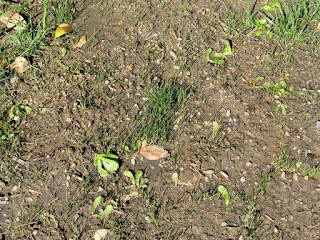 Yeah, that's right. A few new blades of grass in a sea of bald. In fact, I'd say the results are probably pretty similar to those from using Rogaine, come to think of it.
Email Post