Well, I think I can die now. I have thrown my child a moderately successful birthday party, complete with a theme, decorations, TWO homemade cakes, and a person dressed up in a costume. Of course, there were hardly any actual guests, but this is a minor detail. So I'll just start with a picture of my grand achievement, I give you The Brobee Cake: 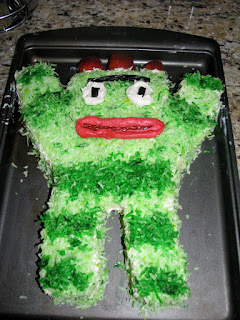 This cake is probably in the top 10 of my proudest accomplishments, right up there with my doctorate, Charlotte herself, and singing karaoke at my husband's office holiday party (this was somehow not one of his proudest moments). It was not easy, I'll tell you. I of course stole someone else's idea, I'm not that good. I got step-by-step instructions from the blog of a REAL Classic Mom, who did think of it herself. I did adapt it a little bit, for instance, I ignored all the instructions to use various organic ingredients and used a cake mix instead. There were some tense moments--The initial layer of icing did not go well. The sides of the cake crumbled horribly when I tried to ice them, and I thought I would just have to stick with icing the top, which would have been a humiliation. Even Kevin balked--I was telling him I thought I would only be able to ice the top of the cake, and all he said in reply was, "Couldn't a bakery have made a cake like this?" I got very huffy at that, he had obviously missed the point, which of course to prove to myself and the world that I could SO be a Classic Mom.

But I did not stop with the Brobee cake. I also fashioned creative party decor from paper plates and hats (Don't tell me this is not just ingenious): 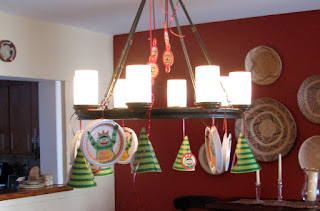 Then of course I had the easy back-up cake in case the Brobee Cake did not turn out: 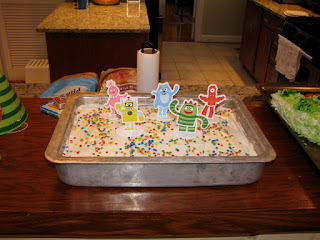 Finishing touch, I forced my husband to dress up as DJ Lance. You ask, did I feel bad subjecting him to this costume? Let me ask you, Did he give birth to the child in question? 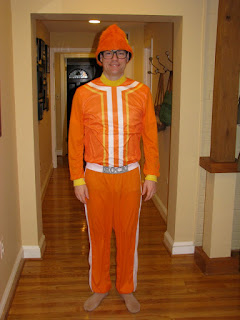 There was one thing I kind of overlooked, however. Well, not overlooked, really, just miscalculated. So there was only one actual child in attendance other than Charlotte. There were several very indulgent adults, but only one actual child. Here's the thing. In general, it is a good rule of thumb to invite double the number of guests to a party than you actually want to attend, assuming that around half will not materialize. But you run the risk that everyone will come, which, if you are talking about a bunch of adults, is not a massive tragedy, it mainly will entail a beer run or two. But if you are talking about a bunch of small children, this is a risk on par with drinking tap water in Kinshasa. You could end up with an explosive situation either way. I, not really liking small children all that much, did not want to risk having a buttload of them running through my house, so I limited the guest list to what I could tolerate. The problem was only one of them actually came, which made the party kind of lame, even if it meant my house was still standing at the end of it.