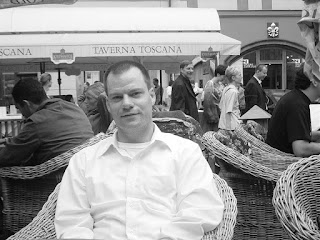 My cousin's mother-in-law recently described my husband Kevin as "redoubtable, inscrutable." So let me offer some anecdotes to help people understand....

Kevin got dragged into joining Facebook a couple years ago because that was how the football league he joined communicated, but Facebook is a misery to him. Each new friend is another person he must not disappoint. He doesn't seem to understand that these people have 300 friends and won't notice or care if he doesn't accept the Likeness Quiz application they sent him or if he doesn't comment on their new profile picture. So it's pretty stressful for him.

We will probably buy a house in 2009 because Kevin, who is an economist, feels like the bottom of the housing market may arrive sometime around November-ish. He may even have a spreadsheet or formula somewhere that calculates the precise date and time, I don't know. He has been awaiting the bottom since 2004, when we first considered buying a house. Of course, as he bemoans every time the subject comes up, he should have bought a house when he moved to DC in 1999. He no doubt had a spreadsheet or formula telling him to buy then, and he would have made a mint. But he didn't because he just couldn't decide where, how much, how big, condo or house, too many decisions!!! This time, he will decide but only because I will make him. Unless he decides we are moving overseas for his job. But he can't quite decide.
I gave Kevin a notebook so he would have something to contain all his brilliant ideas (and so there would not be a trail of post it notes all over my house, although the notebook has not really prevented this organizational calamity). In the notebook, you will find random quotes, usually funny things he or I said to the other that were hysterical at the time but years later just leaves you kind of puzzled, ideas for screenplays he wants to write (which are always for off-beat comedies), economic policy ideas, things he needs to do, friends he needs to email or phone. But he doesn't have time to follow through on any of them because he works 100 hours a week (seems like) putting in 110% into every single task, even the most off-the-cuff-email.
Gift-giving is another nightmare for Kevin.  It is not acceptable to just go and get something, anything like most of us do.  He must have the perfect gift. And if he cannot come up with that, he will wait until the very last minute (or even later) and finally go get something, anything which is probably worse than the something, anything he could have gotten a month before.  So most years, I get something, anything, but every once and awhile, when Jupiter is orbiting Saturn or the moon's largest crater catches the sunlight every 5th year ending in 3, I get something amazing.  Like the time he flew me to St. Louis overnight to see a U2 concert, which is seriously one of the top 5 experiences of my life.  Or this year, when he got me this new MacBook on which I am writing this!
Kevin likes to amuse me by doing impressions. But they are not your usual impressions of Jack Nicholson or George Bush.  They are more like impressions of stick figures, saints in Michaelangelo paintings, or Sam the Eagle.  They are mostly the same impression, just a hair's difference for each. Like the stick figure's eyes are wide and vacant while the saint's eyes are wide and vacant but looking upward.  It's hard to describe.

Even though Kevin seems quiet, reserved and serious, he actually is quite silly and thinks nothing of busting out in the "chicken dance" (as my cousin's mother-in-law called it), which is actually a very poor attempt at the Running Man from the 90's club scene, at Thanksgiving in front of a bunch of people when pressed.  In truth he would rather spend his days doing the chicken dance than solving Turkey's budget crisis.
So that's Kevin.
Email Post